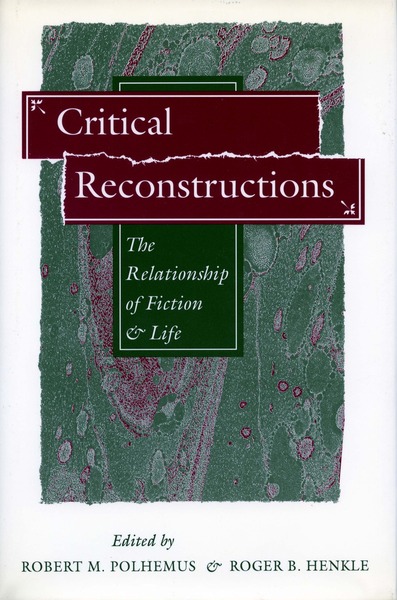 Critical Reconstructions
The Relationship of Fiction and Life
Edited by Robert M. Polhemus and Roger B. Henkle

The subject of this book is the relationship Henry James alludes to when he celebrates the novel's "large, free character of immense and exquisite correspondence with life." Featuring the interplay of fictions and "the real world," its twelve essays explore and expand ideas of what fiction and reality might be. They ask such questions as: How does fiction communicate truth about the world? What is the connection between perceived historical reality and the linguistic form of narration? How does writing formulate or mediate the tensions between public and private life? What exactly do people at a given time want and get from a particular novel? How does a novelist's life give form to a novel? How are reality, the novel knowledge, and the practice and form of fiction known as realism related and what might realism mean as today's critics reconstruct it?

In the wake of Ian Watt's pioneering work, we tend to think of such questions as questions about the novel, and with the exception of the two framing pieces, these essays concern that genre. Tzvetan Todorov opens the volume by examining wildly imaginative accounts written about early global exploration. The next three essays focus on works by Charles Dickens - Michael H. Levenson on David Copperfield, Robert M. Polhemus on The Old Curiosity Shop, and Roger B. Henkle on Dombey and Son. They emphasize the role of cultural psychology in the writing and reception of this most popular of nineteenth-century novelists and stress the novel's historical function in mediating between "inner" and "outer" life.

Next come three studies of realism: by John Bender on the political and epistemological implications of power and violence inherent in realist prose fiction - specifically, in Godwin's Caleb Williams, by George Dekker on the dialectical interplay of conceptions of fiction and realism by Henry James and Robert Louis Stevenson; and by William M. Chace on Joyce's realism in Ulysses. Joseph Frank and Thomas C. Moser follow with studies of Dostoevsky and Faulkner that relate key biographical experiences to Crime and Punishment and The Sound and the Fury.

Next, Juliet McMaster uses Jane Austen's The Watsons to illustrate how criticism can reconstruct an unfinished work, and John Henry Raleigh shows how the reality of a fictional text (Frederic Manning's Her Privates We) can come to have striking evidential power and effect. The final piece by Edward V. Said, returning us to ideas of travel and representation of life on the margin, shows the continual intertwining and merging of theory and fiction.