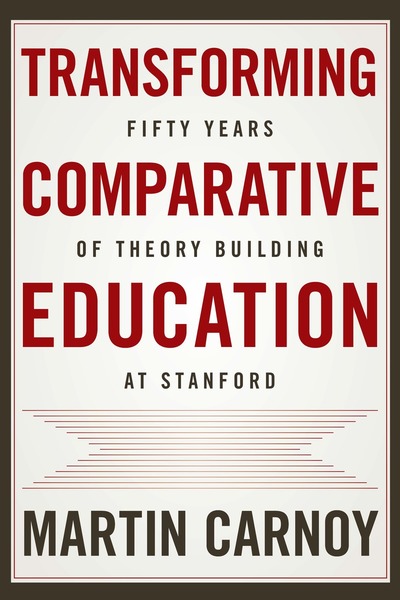 Over the past fifty years, new theoretical approaches to comparative and international education have transformed it as an academic field. We know that fields of research are often shaped by "collectives" of researchers and students converging at auspicious times throughout history. Part institutional memoir and part intellectual history, Transforming Comparative Education takes the Stanford "collective" as a framework for discussing major trends and contributions to the field from the early 1960s to the present day, and beyond.

Carnoy draws on interviews with researchers at Stanford to present the genesis of their key theoretical findings in their own words. Moving through them chronologically, Carnoy situates each work within its historical context, and argues that comparative education is strongly influenced by its economic and political environment. Ultimately, he discusses the potential influence of feminist theory, organizational theory, impact evaluation, world society theory, and state theory on comparative work in the future, and the political and economic changes that might inspire new directions in the field.

"This volume provides unique insight into the research and theories on international education conducted at Stanford University's School of Education, the global leader in the field. It offers a summary of and reflection on the process that led to the findings of over half a century. A jewel in the epistemology of educational studies and of social sciences at large."

"This volume skillfully documents the social forces at play by which theories, policies, and practices in this interdisciplinary field emerged and were transformed since the 1960s. It is a magisterial addition to the literature on the history and political economy of fields of knowledge."