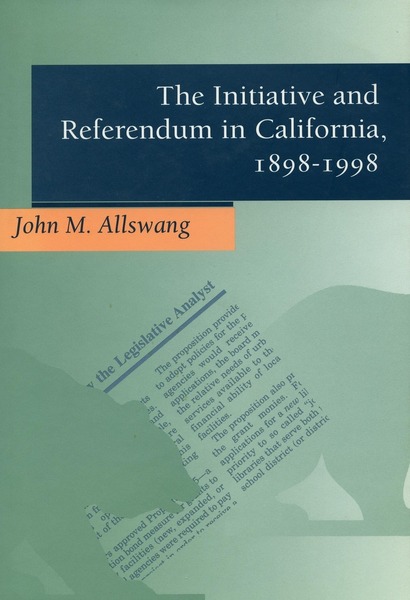 The Initiative and Referendum in California, 1898-1998
John M. Allswang

This book provides a detailed analytic history of direct legislation—the initiative and referendum—in California from its origins in the late nineteenth century to the present day. California was one of the first states to implement mechanisms for direct legislation, and these mechanisms have been used with growing frequency as the entire process has become professionalized (from signature-gathering through fund-raising to legal challenge and defense). The author studies this important political device in terms of voter interest and behavior, its role in public issues, and how it has affected the state’s politics and government.

The book first analyzes how and why direct legislation came to California, seeing it as a typical example of the disconnected nature of progressive era reforms. It then studies selectively, from among the 300 propositions that have been on California ballots, those propositions that have been most relevant to the major issues of their time, have generated the highest levels of voter interest and participation, and have shaped the development of state politics and government.

The author pays particular attention to the explosion of direct legislation, in frequency and consequence, since the Proposition 13 “property tax revolution” of 1978. He also describes how California’s contemporary direct legislation experience—from tax rebellion to harsher criminal justice to controversial ethnic issues—has had national ramifications. The book concludes with a careful analysis of the current state of the initiative and referendum in California: voter attitudes toward the process, its role as a “fourth branch” of government, and arguments for and against changes in the procedure.

Based on extensive research in campaign documents, manuscript collections, the contemporary press, and other primary sources, the book also makes extensive use of voting data, public opinion polls, and official filings of campaign expenditures. All in all, it is the most comprehensive study ever made of a political process that is used today in twenty-seven states.

John M. Allswang is Professor of History at California State University, Los Angeles. He is the author, most recently, of California Initiatives and Referendums, 1912-1990: A Survey and Guide to Research and Bosses, Machines, and Urban Voters (Revised Edition).

"This book provides a solid historical foundation for continued research on the realities of the initiative, an institution critical to the future of California, where more people vote on more issues than anywhere in the world."

"In this book about direct legilation, John M. Allswang has made another important contribution to California history, urban history, and American political history."

"Students and scholars interested in direct democracy in the states have been waiting for Allswang's book to provide a historical context for understanding contemporary use of this important political process. Allswang brushes back the cobwebs of history to reveal that direct legislation politics in the past is surprisingly similar to the present. There has been little effort by scholars—either historians or political scientists—to link the initiative and referendum process to broader political developments in American society. The research is commendable in its attempt to do just this. . . . The text is extremely well written with colorful examples."

—The Journal of Politics

"Professor Allswang has again provided us with a book which every California historian can use with great profit."

"[An] extremely well-researched book . . . .[The Initiative and Referendum in California, 1898-1998] is a very complete analysis of a subject that will be valuable to political scientists. It can become a guidebook for using such initiatives, based on the experiences of the state acknowledged to be the master of the process."