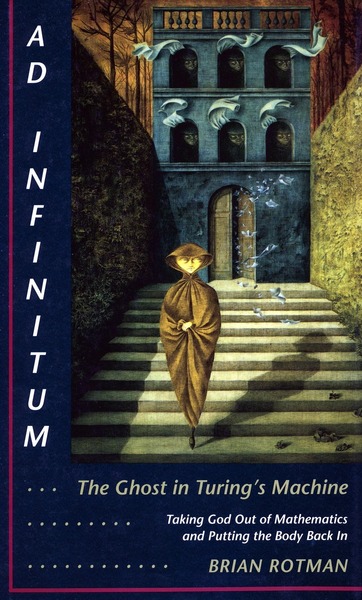 Ad Infinitum... The Ghost in Turing's Machine
Taking God Out of Mathematics and Putting the Body Back In. An Essay in Corporeal Semiotics
Brian Rotman

This ambitious work puts forward a new account of mathematics-as-language that challenges the coherence of the accepted idea of infinity and suggests a startlingly new conception of counting. The author questions the familiar, classical, interpretation of whole numbers held by mathematicians and scientists, and replaces it with an original and radical alternative—what the author calls non-Euclidean arithmetic.

The author's entry point is an attack on the notion of the mathematical infinite in both its potential and actual forms, an attack organized around his claim that any interpretation of "endless" or "unlimited" iteration is ineradicably theological. Going further than critique of the overt metaphysics enshrined in the prevailing Platonist description of mathematics, he uncovers a covert theism, an appeal to a disembodied ghost, deep inside the mathematical community's understanding of counting.

Brian Rotman is an independent scholar and the author of, most recently, Signifying Nothing: The Semiotics of Zero.

"Rotman uses semiotics to focus on the infinite and the meaning of the mathematician's ellipsis. . . . He argues persuasively that a constructive model of the infinite is inherent in the literary acts of mathematicians."