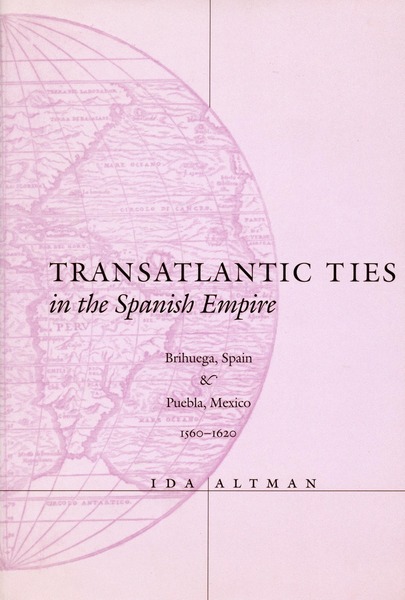 Between 1560 and 1620, a thousand or more people left the town of Brihuega in Spain to migrate to New Spain (now Mexico), where nearly all of them settled in Puebla de los Angeles, New Spain's second most important city. A medium-sized community of about four thousand people, Brihuega had been a center of textile production since the Middle Ages, but in the latter part of the sixteenth century its industry was in decline—a circumstance that induced a significant number of its townspeople to emigrate to Puebla, where conditions for textile manufacturing seemed ideal.

The immigrants from Brihuega played a crucial role in making Puebla the leading textile producer in New Spain, and they were otherwise active in the city's commercial-industrial sector as well. Although some immigrants penetrated the higher circles of poblano society and politics, for the most part they remained close to their entrepreneurial and artisanal origins. Closely associated through business, kinship, marital, and compadrazgo ties, and in residential patterns, the Brihuega immigrants in Puebla constituted a coherent and visible community.

This book uses the experiences and activities of the immigrants as a basis for analyzing society in Brihuega and Puebla, making direct comparisons between the two cities by examining such topics as mobility and settlement; politics and public life; economic activity; religious life; social relations; and marriage, family, and kinship. In tracing the socioeconomic, cultural, and institutional patterns of a town in Spain and a city in New Spain—in all their connections, continuities, and discontinuities—the book offers a new basis for understanding the process and implications of the transference of these patterns within the early modern Hispanic world.

Ida Altman is Professor of History at the University of New Orleans. Her book Emigrants and Society: Extremadura and Spanish America in the Sixteenth Century received the 1990 Herbert E. Bolton Prize of the Conference on Latin American History.

"The stories that Altman relates are revealing accounts of individual experiences in a transatlantic community."

"This superb case study of migration from a Spanish town to an emerging community in New Spain over a 60-year period has broad applicability and implications for the study of transatlantic migration in the early modern period."

"The book exposes and illuminates, as no other study that I know of, the process by which people, institutions, and cultural norms traveled from the Old World to the New during the early modern period, and how they adapted to the American milieu. This is a major accomplishment. And Altman delivers it in elegant prose and and engaging style."

"Ida Altman has written a book that both probes deeply the significance of tying together Iberian and American domains under a common Crown government and brilliantly demonstrates how the comparative history of the first global age ought to be approached. . . . Throughout well-organized and well-written chapters on economic, political, religious, and social life, the book underlines its methodological message: in order to understand the nature and impact of migration, researchers must focus on locality."

—Comparative Studies in Society and History

"With this monograph, Ida Altman completes her innovative conspectus of postconquest culture in specific regions of sixteenth-century Spain and New Spain, begun with her Emigrants and Society. . . . Transatlantic Ties in the Spanish Empire is ground level social history based on careful exploitation of manuscript materials, notably in repositories of Puebla and Mexico City, Seville, and Madrid."

"Transatlantic Ties in the Spanish Empire should be on the book-shelves of every historian of early modern times."The Journal of European Economic History