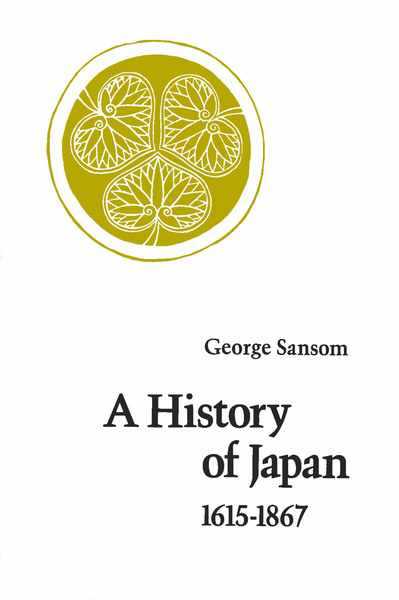 This is the concluding volume of a three-volume work that culminates the life study of the West's most distinguished scholar of Japanese history. A straightforward narrative of the development of Japanese civilization to 1867, the three volumes constitute the first large-scale comprehensive history of Japan.

Unlike the renowned Short Cultural History, it is concerned mainly with political and social phenomena and only incidentally touches on religion, literature, and the arts. The treatment is primarily descriptive and factual, but the author offers some pragmatic interpretations and suggests comparisons with the history of other peoples.

A History of Japan: 1615-1867 describes the political and social development of Japan during the two and half centuries of rule by the Tokugawa Shoguns, a period of remarkable development in almost ever aspects of the national life. Under Ieyasu, the first Tokugawa Shogun, a system of checks and balances to keep the great feudatories in order began to be devised. His successors continued this policy, and indeed the essential features of government by the Tokugawa Shoguns was a determination to keep the peace. Freed from civil war, the energies of the nation were devoted to increasing production of goods in agriculture, manufacturers, and mining.

Breaches in the traditional policy of isolation began to occur with the arrival of foreign ships in Japanese waters, the first intruders being the Russian in the 1790s. Thereafter, the government struggled to keep foreign ships away from Japanese ports, but before long the pressure of the Western powers, strengthened by the arrival of warships under the command of Commodore Perry in 1853, forced Japan to take part in international affairs.