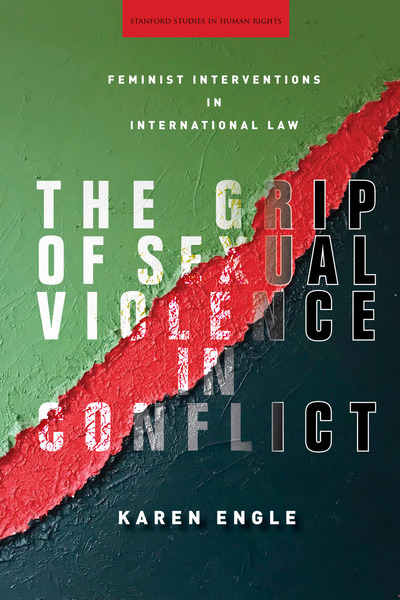 Contemporary feminist advocacy in human rights, international criminal law, and peace and security is gripped by the issue of sexual violence in conflict. But it hasn't always been this way. Analyzing feminist international legal and political work over the past three decades, Karen Engle argues that it was not inevitable that sexual violence in conflict would become such a prominent issue.

Engle reveals that as feminists from around the world began to pay an enormous amount of attention to sexual violence in conflict, they often did so at the cost of attention to other issues, including the anti-militarism of the women's peace movement; critiques of economic maldistribution, imperialism, and cultural essentialism by feminists from the global South; and the sex-positive positions of many feminists involved in debates about sex work and pornography. The Grip of Sexual Violence in Conflict offers a detailed examination of how these feminist commitments were not merely deprioritized, but undermined, by efforts to address the issue of sexual violence in conflict. Engle's analysis reinvigorates vital debates about feminist goals and priorities, and spurs readers to question much of today's common sense about the causes, effects, and proper responses to sexual violence in conflict.

Karen Engle is the Minerva House Drysdale Regents Chair in Law at the University of Texas at Austin, where she founded and co-directs the Bernard and Audre Rapoport Center for Human Rights and Justice. She is the author of The Elusive Promise of Indigenous Development: Rights, Culture, Strategy (2010), which received the APSA Human Rights Section Best Book Award.

"The Grip of Sexual Violence is required reading for understanding how some powerful feminist approaches to international criminal law have produced more problems than solutions. Engle's brilliant and nuanced critique asks us to urgently reconsider the colonial, racial, and cultural assumptions and erasures of such feminism and offers a different path for feminist legal internationalism."

"Karen Engle provides a masterful critical account of the politics of 'common sense' that informs feminist interventions in international law. Her incisive analysis of how the discourse on sexual violence in conflict has come to be based on negative images of sex and sexuality and troubling assumptions about gender, war, and peace marks an invaluable and timely contribution to the field."

"Engle's brilliant book shows how concern with sexual violence displaced and undermined feminist movements for geopolitical peace and equality, risking a regulatory vision for female bodies instead of a 'sex positive' one. Engle reopens fateful choices and closes with an inspiring vision of a different feminism and a different international law."

—Samuel Moyn, author of Not Enough: Human Rights in an Unequal World

"Karen Engle has long been a perceptive critic of the ways in which feminists call on international institutions to support feminist causes. Here, she offers a remarkable case study of how ideas and concepts travel and transform, making a powerful argument for a more nuanced account of gender, sex and conflict, which takes the complexity of human experience into account."

"Karen Engle is one of the most remarkable scholars of human rights movements today. Her work has long questioned what are generally perceived [as] some of the greatest successes of human rights and international law, not least in relation to indigenous rights, feminist advocacy and international criminal law....For its potential to inspire new activism and fresh research, The Grip of Sexual Violence in Conflict is doubtless a pivotal contribution to critical scholarship on human rights and feminism."