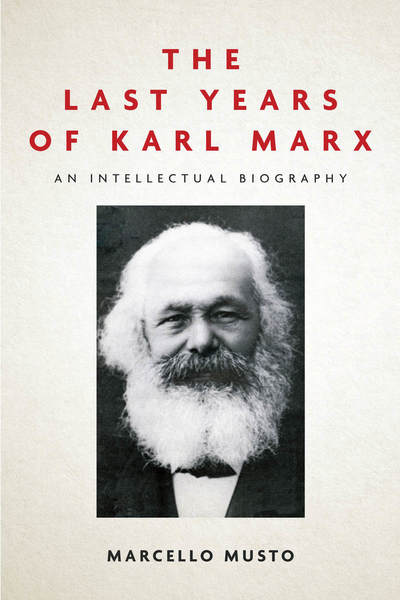 "[A] study that breaks new ground in our understanding of Marx between 1881 and 1883....Musto gives us a portrait of a thinker in his last years that challenges the representations others have imposed upon him."

"Marcello Musto is undoubtedly the rising star on the "marxological" firmament. The Last Years of Karl Marx is an innovative book that helps us, in a magisterial way, to discover Marx's intellectualactivity during the period 1881-1883."

"There has been a gaping hole in studies of Karl Marx leaving out the last few years before his death in March 1883. Despite the recent revival of Marx studies, this 'forgotten chapter' of his life has remained in the shadows, until now with Marcello Musto's informative and well-crafted book, The Last Years of Karl Marx."

"Musto's book presents an overview of Marx's studies, debates, correspondence, affectionate relationships, diseases, sorrows, and journeys during the last years of his life. Pages cataloguing Marx's readings are very useful and informative... Such pages are... followed by stories of Marx's family life, correspondence regarding politics, and Marx's personal relations with his comrades. This rhythm of the prose leads the reader through the pages of this book, which is packed with detailed information."

"Musto clears up the many misunderstandings of Marx, conveying, for example, that Marx did not believe that interpretive frameworks based on Western European history should be slavishly applied to other contexts, and that he was not an economic determinist...Highly recommended."