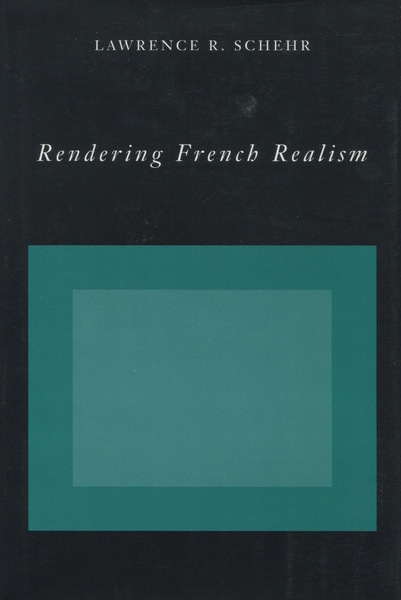 Realist novels are usually seen as verisimilar representations of the world, and even when that verisimilitude is critically examined (as it has been by Marxist and feminist critics), the criticism has referred to extra-literary matters, such as bourgeois ideology or defects in the portrayal of women. This book takes as its thesis that the point defining realism is the point at which the processes of representation break down, a sort of black hole of textuality, a rent in the tissue.

After an initial chapter dealing with the limits and ruptures of textuality, the book considers the work of Stendhal, from its early state as a precursor to the later realism to La Chartreuse de Parme, which shows how the act of communication for Stendhal is always made of silences, gaps, and interruptions. The author then reads several works of Balzac, showing how he, while setting up the praxes of continuity on which his oeuvre depends, ruptures the works at various strategic points. In a chapter entitled "Romantic Interruptions," works of Nerval and the younger Dumas, seemingly unrelated to the realist project, are shown to be marked by the ideological, representational, and semiotic assumptions that produced Balzac.

The book concludes with Flaubert, looking both at how Flaubert incessantly makes things "unfit" and how critics, even the most perspicacious postmodern ones, often try to smooth over the permanent crisis of rupture that is the sign of Flaubert's writing.

Lawrence R. Schehr is Professor of French at the University of South Alabama. He is the author, most recently, of The Shock of Men: Homosexual Hermeneutics in French Writing and Alcibiades at the Door: Gay Discourses in French Literature (both Stanford, 1995).

“This is an outstanding book that builds on a solid tradition of literary criticism centered around the notion of realism and brings to this debate an original and fascinating perspective. Schehr is a subtle and masterly reader of the texts he studies, and the combination of theoretical synthesis and detailed reading that defines his method is rare and exhilarating. Although the works he treats are nineteenth-century French, the theoretical concerns he raises and works through are of importance for any scholar of realism and the novel in general.”—David Bell, III, Duke University

“To his eminently philosophical cast of mind, as evidenced by the rigor of his argument’s deconstructive frame, Schehr marries a remarkable range of literary reference, a strong grounding in narrative theory, and an acute sense for the way questions of gender and sexuality haunt the realist project.”—Peter Starr, University of Southern California