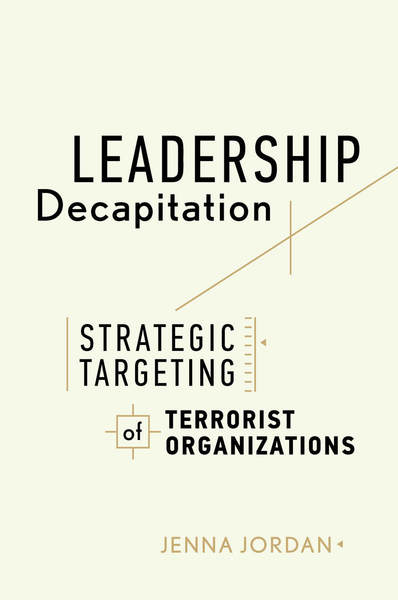 One of the central pillars of US counterterrorism policy is that capturing or killing a terrorist group's leader is effective. Yet this pillar rests more on a foundation of faith than facts. In Leadership Decapitation, Jenna Jordan examines over a thousand instances of leadership targeting—involving groups such as Hamas, al Qaeda, Shining Path, and ISIS—to identify the successes, failures, and unintended consequences of this strategy. As Jordan demonstrates, group infrastructure, ideology, and popular support all play a role in determining how and why leadership decapitation succeeds or fails. Taking heed of these conditions is essential to an effective counterterrorism policy going forward.

"Jenna Jordan's outstanding analysis bucks the prevailing view that we can kill our way to the end of Islamist terrorism. She skillfully demonstrates how targeting hundreds of terrorist leaders can be a short-term tactic with deep strategic drawbacks. Ever wondered why, decades later, the United States is still fighting an interminable 'global war on terrorism'? Read this excellent book."

"Jenna Jordan has written a superb book about the consequences of decapitating the leadership of terrorist organizations. She provides a neat theory and an abundance of evidence, which together make a compelling case that successful decapitation rarely harms the organization itself, and that includes the two groups the United States cares the most about: al-Qaeda and ISIS."

"This timely book lends convincing and important evidence to the leadership decapitation debate. Jenna Jordan exposes the need for a comprehensive strategy if we are to successfully defeat terrorist organizations."

"Jordon's study will be important for those studying or involved in making political policy. Highly recommended."

"Jordan's book is a major contribution to the literature, and she should be recognized for her valuable research and commitment to bringing empirical evidence to bear on such a hotly contested issue. She deftly illustrates that removing high-value targets is not a panacea and, as the central focus of her book, examines when decapitation works, when it does not, and what accounts for variation across cases."

—Colin Clarke, War on the Rocks

War on the Rocks
More in Security Studies—Counterinsurgency and Terrorism