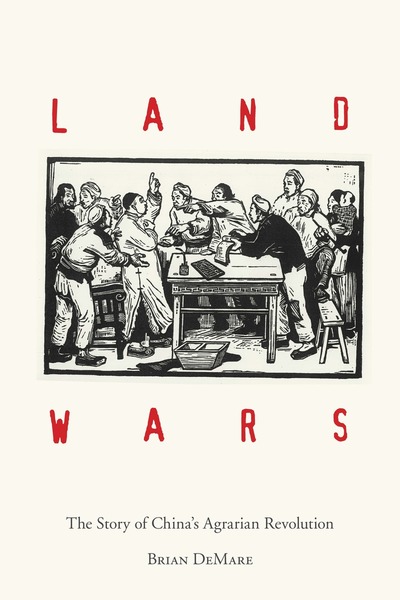 Mao Zedong's land reform campaigns comprise a critical moment in modern Chinese history, and were crucial to the rise of the CCP. In Land Wars, Brian DeMare draws on new archival research to offer an updated and comprehensive history of this attempt to fundamentally transform the countryside. Across this vast terrain loyal Maoists dispersed, intending to categorize poor farmers into prescribed social classes, and instigate a revolution that would redistribute the land. To achieve socialist utopia, the Communists imposed and performed a harsh script of peasant liberation through fierce class struggle. While many accounts of the campaigns give false credence to this narrative, DeMare argues that the reality was much more complex and brutal than is commonly understood—while many villagers prospered, there were families torn apart and countless deaths. Uniquely weaving narrative and historical accounts, DeMare powerfully highlights the often devastating role of fiction in determining history. This corrective retelling ultimately sheds new light on the contemporary legacy of land reform, a legacy fraught with inequality and resentment, but also hope.

Brian DeMare is Associate Professor of History at Tulane University.

"Richly documented and elegantly written, Land Wars reveals the contradictions and ironies intrinsic to the Chinese Communist Party's theory and practice of land reform. A welcome addition to the literature on the Communist revolution, it offers a counter narrative to the stories told in William Hinton's Fanshen in many ways."

"Land Wars successfully challenges still deeply-entrenched Chinese Communist mythologies about the nature and dynamics of the 1945-1952 land reform. DeMare's penetrating discussion of ferocious, ritualized class struggle campaigns skillfully demonstrates how land reform was not about economic change. This book is essential reading for anyone interested in the imposition of Communist political control at the grassroots."

—Shaofan An, Journal of Chinese History

"The socialist practices in the early People's Republic of China have received ample scholarly attention in recent years. Brian DeMare's Land Wars is a very thorough, thought-provoking study that complicates extant literature and will certainly deepen readers' understanding of the essence of Chinese socialism."