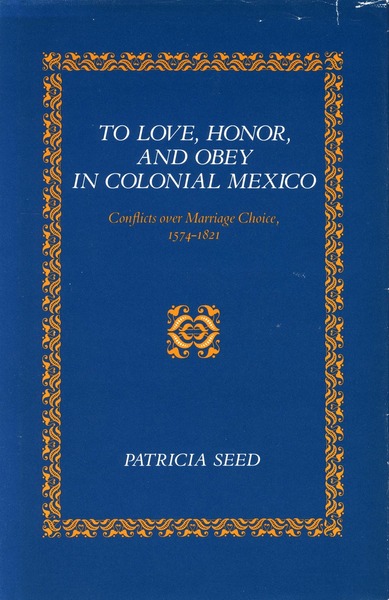 The sources for this study are diverse. Decrees of ecclesiastical councils, papal bulls, and canonical commentaries were investigated to identify the formal Catholic doctrines on marriage. Catechisms, confessional manuals for priests, and popular religious literature were consulted to determine how the church's formal teachings were understood and interpreted as guides for concrete action. The basic cultural attitudes toward marriage, love, and honor were studied in both popular religious literature and the drama and prose of Spain's Golden Age. The backbone of this study, however, consists of the actual records of prenuptial disputes that took place in the colony of New Spain.

The geographical area from which the prenuptial disputes are drawn is the archdiocese of Mexico, which in colonial times embraced the highly populated central region of the Spanish colony of New Spain. About three-quarters of the documentation originated in Mexico City itself; the remainder came from urban areas outside the city.

Two types of records form the documentary base of the study. The first and largest category is that of ordinary marriage applications, which were made by every couple who wanted to marry and were the first official step toward marriage. Every couple had to appear before the local priest (or simply his notary in the larger parishes) to declare that both parties were free to marry and intended to do so. Often couples were accompanied by witnesses who were prepared to swear to the truth of the statements. It was in the course of these ordinary applications that couples informed church officials in their own words of any opposition to their wedding, and it is from these first applications that most of the evidence concerning marriage conflicts originates. A second and much smaller body of documentary evidence consists of the records of lawsuits and formal appeals to church officials to halt or permit marriages. Such cases represent only a small fraction of the incidents of opposition and tended to involve only the wealthiest families, who could afford such actions.

In addition to reading nearly all the surviving marriage license applications for Mexico City of the colonial period (approximately 16,000 applications), the author examined a major portion of the approximately 300 extant formal lawsuits over prenuptial disputes for the archdiocese of Mexico during the colonial period. For the final period covered by the study, when the church ceded its control over prenuptial disputes to the crown, the author examined the appeals to the central royal court in the viceroyalty of New Spain, called the Audiencia of Mexico. Although its jurisdiction extended beyond the boundaries of the archdiocese, the Audiencia was the secular unit that corresponded most closely to the archdiocesan one.