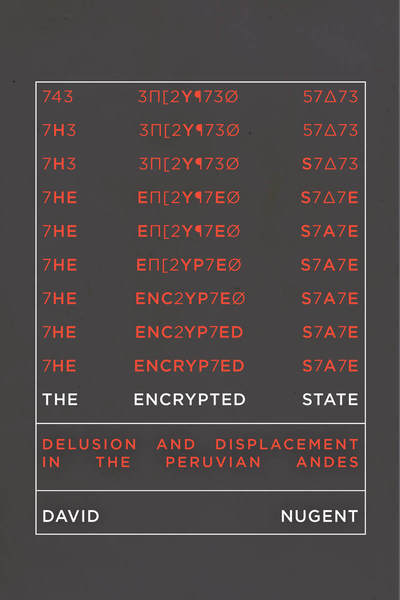 What happens when a seemingly rational state becomes paranoid and delusional? The Encrypted State engages in a close analysis of political disorder to shed new light on the concept of political stability. The book focuses on a crisis of rule in mid-20th-century Peru, a period when officials believed they had lost the ability to govern and communicated in secret code to protect themselves from imaginary subversives. The Encrypted State engages the notion of sacropolitics—the politics of mass group sacrifice—to make sense of state delusion. Nugent interrogates the forces that variously enable or disable organized political subjection, and the role of state structures in this process. Investigating the role of everyday cultural practices and how affect and imagination structure political affairs, Nugent provides a greater understanding of the conditions of state formation, and failure.

David Nugent is Professor of Anthropology at Emory University. His previous books include Locating Capital in Time and Space (SUP, 2002) and Modernity at the Edge of Empire (SUP, 1997).

"Nugent's deep and discerning dive in the archives has—and not for the first time—surfaced striking new conceptual treasures for the analysis of state-making. The Encrypted State enlarges and enriches our understanding of how 'flailing' states disguise their disorder with the pretense of routine and, behind the scenes, paranoia. A superb and lasting contribution."

—James C. Scott, author of Seeing Like a State: How Certain Schemes to Improve the Human Condition Have Failed

"This brilliant, inspired book reshapes the debate about 'the state' in a number of disciplines, challenging virtually all the prevailing orthodoxies about states in their relation to societies. Nugent's theoretical insights are hard-won, arising organically from deep immersion in empirical, archival research."

"When states 'state' they often do so not as well-oiled rational bureaucratic machines but rather in hysterical, delusional, and paranoid ways. Based on fascinating archival sources, Nugent's study of a state ruled by fear sheds new light on the regional history of Chachapoyas and the political history of modern Peru. Above all, it makes a deeply original contribution to the literature on state formation."