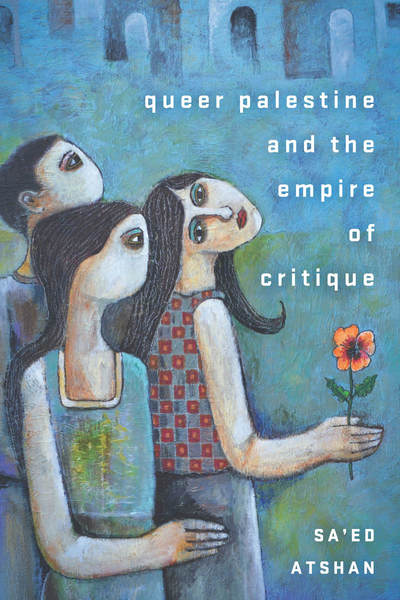 Queer Palestine and the Empire of Critique
Sa’ed Atshan

Honorable Mention in the 2021 Ruth Benedict Prize, sponsored by the Association for Queer Anthropology.

From Ramallah to New York, Tel Aviv to Porto Alegre, people around the world celebrate a formidable, transnational Palestinian LGBTQ social movement. Solidarity with Palestinians has become a salient domain of global queer politics. Yet LGBTQ Palestinians, even as they fight patriarchy and imperialism, are themselves subjected to an "empire of critique" from Israeli and Palestinian institutions, Western academics, journalists and filmmakers, and even fellow activists. Such global criticism has limited growth and led to an emphasis within the movement on anti-imperialism over the struggle against homophobia.

With this book, Sa'ed Atshan asks how transnational progressive social movements can balance struggles for liberation along more than one axis. He explores critical junctures in the history of Palestinian LGBTQ activism, revealing the queer Palestinian spirit of agency, defiance, and creativity, in the face of daunting pressures and forces working to constrict it. Queer Palestine and the Empire of Critique explores the necessity of connecting the struggles for Palestinian freedom with the struggle against homophobia.

Sa'ed Atshan is Assistant Professor of Peace and Conflict Studies at Swarthmore College. He is the coauthor of The Moral Triangle: Germans, Israelis, Palestinians (2020).

"This utterly brilliant book will be a classic. Sa'ed Atshan's comprehensive study of queer Palestinian activism provides a rich understanding of the complex intersections of selfhood, activism, and belonging. By demonstrating the limits of binarisms of East/West and self/other through detailed empirical analysis and powerful theoretical interventions, Atshan has given us a landmark work valuable to Middle East studies, queer studies, and anthropology in the broadest sense."

—Tom Boellstorff, University of California, Irvine, author of The Gay Archipelago: Sexuality and Nation in Indonesia

"Queer Palestine and the Empire of Critique is a breath of fresh air! In the academic climate in which 'radical' has become synonymous with crude schisms between West and East, authentic and inauthentic, pure and sellout, this book provides a much-needed nuanced account of Queer Palestine. Sa'ed Atshan carefully historicizes the local terrain and rightly problematizes how US-based scholarship has turned the critique of empire into an empire of critique. This is a brilliant call for academic self-reflection and a brave rejection of so-called radical myths of cultural authenticity."

"Sa'ed Atshan brilliantly weaves together ethnography and personal experience in the most thoughtful, engaging, and emotionally captivating ways. His sophisticated work captures the nexus of a scholar-activist, offering an authoritative account of the challenges and trajectory of the Palestinian LGBTQ movement. A tour de force and a remarkable book for both its theoretical and empirical contributions."

"This powerful and prophetic book shows that the struggle for justice and freedom against empire and homophobia are indivisible. Sa'ed Atshan's text is a major intellectual force for good."

"In Queer Palestine and the Empire of Critique, Sa'ed Atshan provides a brilliant theorization of an excessive mode of political critique that strives for the high ground yet contributes to the calcification of social justice movements. Through a nuanced ethnography that foregrounds the plurality of queer experience in Israel and Palestine and the enormous complexity of the global Palestinian solidarity movement, Atshan demonstrates how an intellectual stance that combines a conviction of the moral superiority of one's political judgments with deep suspicion concerning others' complicity in relations of domination and the likely oppressive consequences of prescriptions for social transformation engenders discursive disenfranchisement, loss of key intellectual distinctions, neglect of pragmatic constraints, demoralization of activists, and the truncation of transnational queer solidarity. This deeply insightful book makes vital contributions to Queer Studies, Middle East Studies, Social Movement Studies, and an understanding of the dynamics of social justice praxis."

"Atshan's book, an autoethnography of queer Palestine, is methodologically impeccable, incorporating academic work and personal positioning. He advances a philosophy of critique centered on the everyday material lives of people, that is both complex and masterfully written. He makes a bold and thought-provoking argument—one that speaks to social justice activists as well as academics."

"[A] timely and urgent account....Along with a succinct presentation of the immense challenges faced by the LGBTQ-identifying Palestinians, Atshan highlights Palestinian agency, ingenuity, and resilience."

"[Atshan] immaculately illustrates the development of movements along with the challenges they face by both conservative Palestinians and Arabs at large and by the repressive occupation. This work is pioneering and fills a significant gap within Middle East Studies."

"The goal of Atshan's sensitive 'critique of critique' is fostering a 'transforming activism with loving energy' that helps the Palestinian LGBTQ movement start to grow again and reach its full potential. His long-term hope is 'that Israelis and Palestinians, straight and queer, can all live together as equals.' My hope is that all Friends will seek to find ways to help achieve this healing vision."

"Atshan's work, in describing the empire of critique surrounding the queer Palestinian experience, demonstrates the highly politicised nature of certain rights and their potential to be weaponised in order to subvert the gaze from other issues. Furthermore, through his analysis of the heterogeneity of narratives surrounding this liberation movement, he reminds us that the voices of those that exist at these intersections of oppressions should and must be the loudest."

"Queer Palestine and the Empire of Critique is a much-needed contribution to queer studies, Middle East studies, and scholarship on social movements and a must-read for those who are committed to the difficult politics of solidarity."

"This is a most timely and admirably courageous book that challenges the seeming gap between queer activism and anthropology...Atshan shows that anthropology has the potential to support local activist struggles against homophobia and imperialism by rigorously engaging with, rather than dismissing, the experiences and views of these activists—their simultaneous engagement with multiple axes of oppression."

"Atshan makes a major contribution to the study of social movements generally and the queer Palestinian movement specifically. Atshan conceptually explores resistance and identity in the context of Israeli and Palestinian conflict. He offers an empirically rich and compelling account, where readers are let into the everyday life of the global queer Palestinian solidarity movement."

"The nature of life under colonisation and occupation, in Atshan's view, means that no one, not even 'the most radical activists and academics', can lay claim to the moral high ground. Everyone is implicated in some way. It's better to edge forward in modest ways."

"[Atshan's] work fills gaps and addresses the silences and deliberate erasures in Palestine studies, Middle East studies, Middle East anthropology, queer theories, and peace and conflict studies, showing how 'queer liberation cannot be realized while colonial subjugation persists,' because these struggles are 'inextricably linked' (p. 222). Scholars and students engaged in Israel/Palestine and settler colonial struggles will benefit from this auto/ethnographic text of subjectivities on the ground."

"[Atshan's] book is the culmination, at least for now, of his years-long effort to persuade his activist community to simultaneously oppose Israeli rule and Palestinian homophobia, and not privilege the one over the other... Atshan's book is a trenchant clarion call, harnessed to the words of the iconic African American poet Audre Lorde: 'there is no hierarchy of oppressions.'"

The Advocate
Imperialism, patriarchy and the history of Palestinian LGBTQ activism