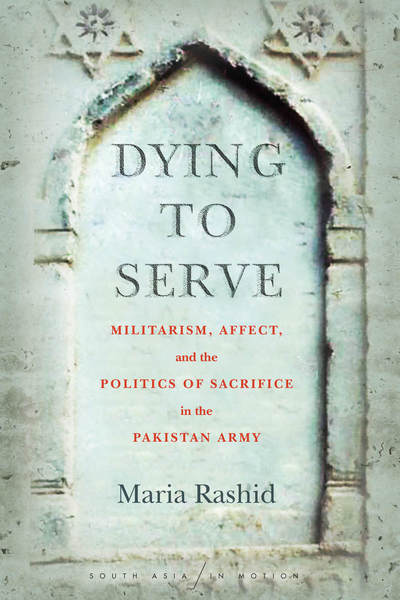 "Psychologist Maria Rashid has produced an extraordinary survey in which she seeks to demonstrate the Pakistan military has used death in combat, particularly the concept of martyrdom, as a tool to extend its domination over the country's political and civil society."

"Every story [I've encountered] demonstrated a dangerous doubt at the very heart of the military; a sign that this powerful institution—which likes to present itself as homogenous, disciplined, heroic and united—is more broken than the generals would have us believe. Maria Rashid's new book,Dying To Serve: Militarism, Affect and the Politics of Sacrifice in the Pakistan Army, is a powerful intervention in studies of Pakistani militarism for precisely this reason."

"A compelling account of how micro-level developments fit with the broader pursuit of the Pakistan Army's agenda and narrative, Dying to Serve should be compulsory reading for students and scholars of the army, politics and nationalism at the grassroots level."

"Dying to Serveboth broadens the anthropology of militarism's geographic focus, which has largely been the United States, and deepens anthropological understandings of militarism as a cultural system through Rashid's rigorous analysis of its gendered and affective dimensions."

"Rashid's book is a remarkable study, providing a social lens through which to see and understand the layered complexities of the relationship between the army, its 'immediate' subjects (families of deceased soldiers) and the nation at large. The book has also opened up space for further research on pacifist, cultural, feminist and post-colonial themes in the context of the Pakistani military."

"[Dying to Serve] provides a fresh contribution to the study of militarization in Pakistan by drawing upon a psychosocial approach and by focusing on aspects of subjectivity and intimacy in investigating the role played by gender and families in the constitution of the Pakistan Army. The book will certainly prompt fresh discussions and debates in thinking about the Pakistan Army in relationship to kinship, particularly given that so much of the existing scholarship is either focused on [the War on Terror] through the perspective of foreign policy, global geopolitics and military strategy, or where the Pakistan Army is discussed as an important actor in domestic politics and in the country's economy."

"The Pakistan Army...has deep roots in the colonial armed forces and relies heavily on certain regions to supply its soldiers, especially parts of rural Punjab, where men have served in the army for generations. These men, their wives and mothers, and the military culture surrounding them are the focus of Maria Rashid's Dying to Serve, which innovatively and sensitively addresses the question: how does the military thrive when so much of its work results in injury, debility, and death?"

"One of the most important contributions ofDying to Serveis elucidating the materialist grounds on which militarism stands, undergirded by a historical colonial political economy that is reworked for contemporary Pakistani militarism."

"Over the course of the last decade, scholarship on the Pakistan Army has proliferated; however, Rashid's Dying to Serve stands out because she has done what others have been unable to do: conduct research among and on the enlisted ranks of the Pakistan Army and their families, with a particular focus on the district of Chakwal. That Rashid identified these men as a site of important empirical work is to her commendation; that she devised a suitable research methodology to conduct the work is remarkable."