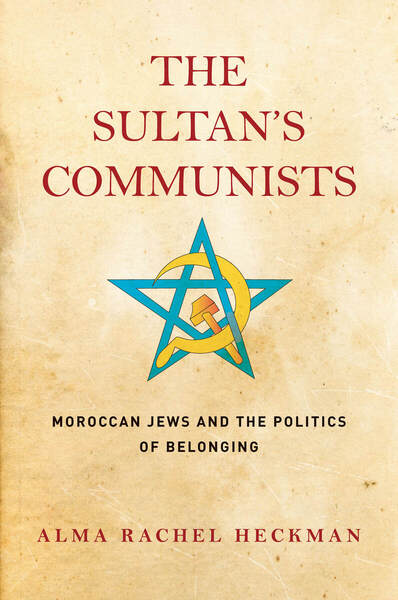 Named a 2021 Best Book of the Year by Middle East Eye.

The figures at the center of Heckman's narrative stood at the intersection of colonialism, Arab nationalism, and Zionism. Their stories unfolded in a country that, upon independence from France and Spain in 1956, allied itself with the United States (and, more quietly, Israel) during the Cold War, while attempting to claim a place for itself within the fraught politics of the post-independence Arab world. The Sultan's Communists contributes to the growing literature on Jews in the modern Middle East and provides a new history of twentieth-century Jewish Morocco.

Alma Rachel Heckman is Neufeld-Levin Chair of Holocaust Studies and Assistant Professor of History and Jewish Studies at the University of California, Santa Cruz.

"With meticulousness and fervor, Alma Rachel Heckman offers a unique historical entry to North Africa's Jewish communities. Written from the perspective of a marginal group within the Jewish community of Morocco, The Sultan's Communists provides a new and refreshing understanding of minority politics in colonial and post-colonial societies. A significant contribution to Jewish studies in the Middle East and North Africa."

"The Sultan's Communists tells the paradoxical and largely unknown story of a group of Moroccan Jewish militants who identified with Morocco's national liberation movement and remained in Morocco as patriotic citizens after independence when the majority of Jews were emigrating to Israel. Alma Rachel Heckman's riveting account of political activism, imprisonment, torture, exile, and cooptation reveals the possibilities and limitations of Jewish belonging in an Arab Muslim country."

"In this innovative study about Moroccan communist Jews, Alma Rachel Heckman explores radical leftist movements, their struggles against fascism, and their battles for national liberation and social justice. The book masterfully reconstructs the nonsectarian vision these Jewish radicals developed, illustrating how communism served as a patriotic option for Moroccan Jews. A unique and compelling tribute to the activism and heroism of Moroccan radical Jews."

"Alma Rachel Heckman has written an original and important book concerning the role that radicalized Jews played in Morocco's struggle for independence from France and in newly independent Morocco."

—Sheldon Kirschner, The Times of Israel

"As a historian, Heckman does a very fine job in offering to the reader a detailed account of the delicate twists and turns of every actor. She manages to see both the structural similarities between them as well as the peculiar idiosyncrasies. Equally important, she contextualizes these marginal actors so to comprehend their actions and utterances in the broader picture. By doing so, she demonstrates how one can focus on a marginal—some would say neglected—group of people and understand grand-scale processes in Morocco."

"Alma Rachel Heckman has written an original and important book concerning the role that radicalized Jews played in Morocco's struggle for independence from France and in newly independent Morocco."