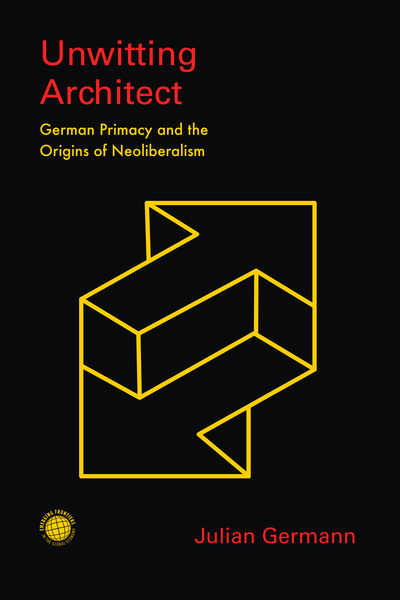 The global rise of neoliberalism since the 1970s is widely seen as a dynamic originating in the United States and the United Kingdom, and only belatedly and partially repeated by Germany. From this Anglocentric perspective, Germany's emergence at the forefront of neoliberal reforms in the eurozone is perplexing, and tends to be attributed to the same forces conventionally associated with the Anglo-American pioneers. This book challenges this ruling narrative conceptually and empirically. It recasts the genesis of neoliberalism as a process driven by a plenitude of actors, ideas, and interests. And it lays bare the pragmatic reasoning and counterintuitive choices of German crisis managers that are obscured by this master story.

Drawing on extensive original archival research, this book argues that German officials did not intentionally set out to promote neoliberal change. Instead they were more intent on preserving Germany's export markets and competitiveness in order to stabilize the domestic compact between capital and labor. Nevertheless, the series of measures German policy elites took to manage the end of golden-age capitalism promoted neoliberal transformation in crucial respects: it destabilized the Bretton Woods system; it undermined socialist and social democratic responses to the crisis in Europe; it frustrated an internationally coordinated Keynesian reflation of the world economy; and ultimately it helped push the US into the Volcker interest-rate shock that inaugurated the attack on welfare and labor under Reagan and Thatcher.

From this vantage point, the book illuminates the very different rationale behind the painful reforms German state managers have demanded of their indebted eurozone partners.

"With an alternative origin story of neoliberalism pivoting on the historical role of Germany and its contemporary 'primacy' within the European Union, Germann treats the reader to a fresh perspective on the uneven and combined developmental trajectory of capitalist discipline and deflection."

"A strikingly original, deeply important, and fantastically well-researched book which challenges and recasts much of what we thought we knew about the origins of neoliberalism in Europe and, indeed, beyond. Highly recommended, this is destined to become a key reference point in all subsequent debate on this crucial topic."

"This seminal work fundamentally recasts our understanding of the evolution of the international political economy since 1945. Based on extensive archival research, Germann's book shows convincingly that the Federal Republic of Germany played a central role in the global neoliberal counterrevolution and that its contemporary European primacy is a central factor in the contemporary global crisis."

"In this highly readable, thoroughly documented and at times controversial study, Germann argues that Germany's contribution to the shaping of global neoliberalism goes much deeper than usually recognized. Ever since the global recession of the 1970s Germany has been a key architect—albeit an unwitting one—of the neoliberal global order. A must-read for scholars of European and global political economy!"

"Thoroughly convincing and excellently sourced [Unwitting Architect] is a pivotal and timely book and one any informed citizen would benefit from reading." - Julian Clos, Spectrum Culture