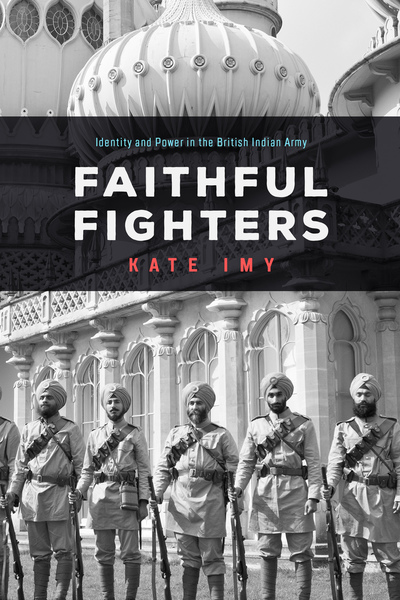 Winner of the 2020 Stansky Book Prize, sponsored by the North American Conference on British Studies (NACBS).

During the first four decades of the twentieth century, the British Indian Army possessed an illusion of racial and religious inclusivity. The army recruited diverse soldiers, known as the "Martial Races," including British Christians, Hindustani Muslims, Punjabi Sikhs, Hindu Rajputs, Pathans from northwestern India, and "Gurkhas" from Nepal. As anti-colonial activism intensified, military officials incorporated some soldiers' religious traditions into the army to keep them disciplined and loyal. They facilitated acts such as the fast of Ramadan for Muslim soldiers and allowed religious swords among Sikhs to recruit men from communities where anti-colonial sentiment grew stronger. Consequently, Indian nationalists and anti-colonial activists charged the army with fomenting racial and religious divisions. In Faithful Fighters, Kate Imy explores how military culture created unintended dialogues between soldiers and civilians, including Hindu nationalists, Sikh revivalists, and pan-Islamic activists. By the 1920s and '30s, the army constructed military schools and academies to isolate soldiers from anti-colonial activism. While this carefully managed military segregation crumbled under the pressure of the Second World War, Imy argues that the army militarized racial and religious difference, creating lasting legacies for the violent partition and independence of India, and the endemic warfare and violence of the post-colonial world.

Kate Imy is Assistant Professor of History at the University of North Texas.

"This astute cultural history of the British Indian Army moves beyond the binary of loyalty and rebellion to track the assemblage of beliefs and bodily practices at stake in war and peace across empire's frontier regions. No other book captures so well the psychic life of war's devotional cultures, whether on the colonial battlefield or off."

"Faithful Fighters shows that violence and militarization associated with martial identities were widely adopted in Indian nationalist cultures, with profound consequences for the future. The book makes crucial contributions to South Asian, military, and colonial history."

"Faithful Fighters is an important addition to the growing body of scholarly work on the colonial Indian army, and the project of global militarization that underwrote modern European imperialism. Through new materials and archives, Imy's major contribution is to the overlooked imbrication of anticolonialism and military culture in these contexts."

"[Imy] paints a compelling picture of...various communities projecting their own ideations onto the colonial state, which in turn forced it to react and adapt....Faithful Fighters should prove to be an engaging and interesting read for anyone interested in Indian military history in the twentieth century."

"[An] intelligent and thought-provoking look into the complicated nature of power dynamics and relationship building available to both the British Empire and the indigenous groups of South Asia during the early twentieth century....This book is a must read for those interested in the Indian Army's social history and those iinterested in the construction of race and national identity. Imy's addition to the growing literature on the Indian Army expands on the social and cultural aspect of the military organization, and her analysis is inestimable."

"In Faithful Fighters, Kate Imy undertakes a refreshing investigation into the Indian Army between the 1910s and 1930s to trace the roots and development of religious militarism and racial masculinity in the colonial military institution of British India."

"There is much to like about Faithful Fighters' rich description of colonial efforts to recruit loyal soldiers in the British Indian army. Imy does an excellent job of highlighting the racial, gender, and class-based assumptions of British military policy, as well as the complex identities and agency of Indian soldiers... This will be a valuable resource for anyone interested in the military's role in identity formation and the challenges of building loyalty in multiethnic societies."