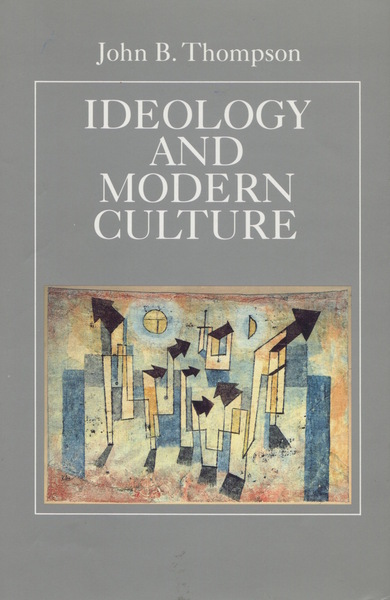 Ideology and Modern Culture
Critical Social Theory in the Era of Mass Communication
John B. Thompson

In this major work, informed by materials from several disciplines and theoretical orientations, the author develops a distinctive new account of the theory of ideology and relates it to the analysis of culture and mass communication in modern societies.

In the two centuries since is first appeared in France, the concept of ideology has undergone many transformations. It has been twisted, reformulated, recast, and finally filtered back into the everyday language of social and political life. Although there is much that is misleading and erroneous in the traditions of ideology, the author shows that it still defines a terrain of analysis that remains central to contemporary social sciences and continues to be the site of lively theoretical debate.

The key to his analysis is what he terms the "mediazation" of the culture—the general process by which the transmission of symbolic forms becomes increasingly reliant on the technical and institutional apparatuses of the media industries. Building on the work of Geertz and others, the author asserts that symbolic forms are embedded in such structured social contexts as power relations, forms of conflict, and inequalities in the distribution of resources, and that any discussion of mass communication must embrace its political as well as epistemological content.

John B. Thompson is Lecturer in Sociology at the University of Cambridge and Fellow of Jesus College, Cambridge.

“This is a pathbreaking work which will undoubtedly become one of the fundamental texts in the theory of ideology.”—William Outhwaite, University of Sussex