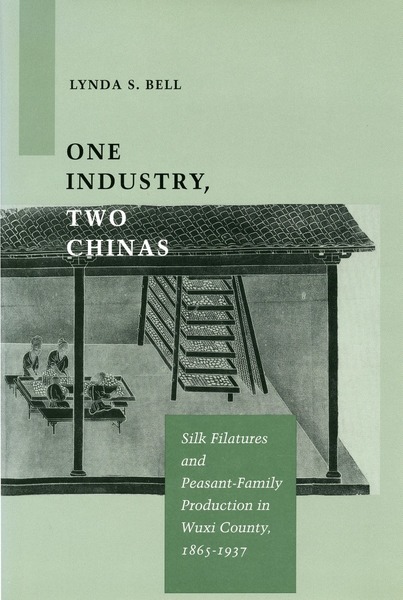 This book reopens and restructures the grand debate on the nature of economic development in China prior to the Communist revolution. It rejects the debate’s old contours in which quantitative data were used to argue that the trajectory of Chinese development was either “positive” or “negative.” Instead, the author combines quantitative analysis with a detailed study of local politics, culture, and gender to explain the shaping of the modern Chinese economy.

Focusing on silk production in Wuxi county in the Yangzi Delta, the author argues that local elites used social dominance to build a silk industry continuum—“one industry”—fusing modern factory production with older patterns of peasant-family farming. The resulting social configuration was “two Chinas”—one populated by wealthy urban elites transformed into a new, silk-industry bourgeoisie, and the other by peasant families whose women became the workforce for cocoon production.

The author describes the roles of merchant guilds and other elite organizations established to protect the silk industry from outside competition and excessive taxation; the methods and styles of elite networking and investment in building modern silk filatures; and the roles of women—elite women in sericulture reform and peasant women in silkworm raising. She also reveals the cooperation between silk-industry elites and Nationalist government officials in the 1920’s and 1930’s, which resulted in an industry that was virtually state-directed and designed to pass downward to the peasants the costs of building more competitive silk filatures. This discovery challenges the prevailing tendency to think in terms of radical ruptures between Nationalist and Communist rule.

Lynda S. Bell is Assistant Professor of History at the University of California, Riverside.

"This book should set new standards for local historical research and for studies of political/economic development in China. It is not just an important contribution to a field of study but a landmark of sorts. . . . With her careful organization and engaging style, Bell succeeds in presenting an extremely complex subject with remarkable clarity."

"Bell treats her subject with remarkable clarity, neatly steering her discussion between the optimistic and the pessimistic approaches taken by many previous commentators on economic development during the period covered by her book. . . . [This] is a work of impressive scholarship, eminently readable, and of value to anyone interested in the history of Chinese industrial development and the silk industry in particular."

"Bell has taken immense pains to provide the detailed factual evidence for a chronic economic tragedy."

"With this book Lynda Bell contributes a major piece to our understanding of China's modern economic history. The core of the book is a detailed description of the evolution of the sillk industry in central China between the late 19th century and the mid-20th century. . . . Specialists in Chinese economic and social history will want to add this book to their personal libraries. It would also serve as an excellent material for graduate or advanced undergraduate students because of its comprehensive analysis and Bell's clearly explained utilization of a wide variety of historical sources."