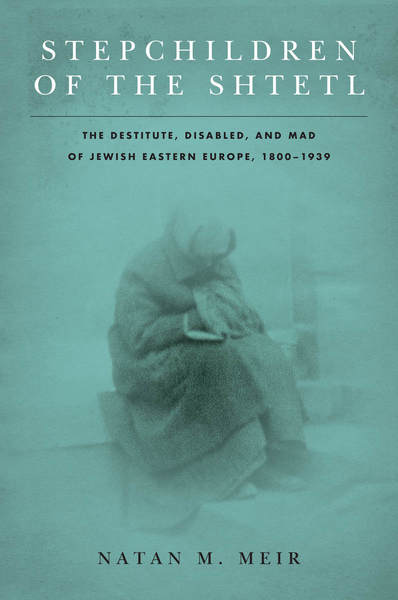 Memoirs of Jewish life in the east European shtetl often recall the hekdesh (town poorhouse) and its residents: beggars, madmen and madwomen, disabled people, and poor orphans. Stepchildren of the Shtetl tells the story of these marginalized figures from the dawn of modernity to the eve of the Holocaust.

Combining archival research with analysis of literary, cultural, and religious texts, Natan M. Meir recovers the lived experience of Jewish society's outcasts and reveals the central role that they came to play in the drama of modernization. Those on the margins were often made to bear the burden of the nation as a whole, whether as scapegoats in moments of crisis or as symbols of degeneration, ripe for transformation by reformers, philanthropists, and nationalists. Shining a light into the darkest corners of Jewish society in eastern Europe—from the often squalid poorhouse of the shtetl to the slums and insane asylums of Warsaw and Odessa, from the conscription of poor orphans during the reign of Nicholas I to the cholera wedding, a magical ritual in which an epidemic was halted by marrying outcasts to each other in the town cemetery—Stepchildren of the Shtetl reconsiders the place of the lowliest members of an already stigmatized minority.

Natan M. Meir is the Lorry I. Lokey Professor of Judaic Studies at Portland State University.

"In this pioneering book, Natan M. Meir illuminates the lives of those on the margins of an already marginalized people—the Jews of Eastern Europe. Drawing on a remarkable range of sources, he revolutionizes our understanding of the shtetl by shedding light on the beggars, orphans, and others who dwelled in its shadows."

—Nathaniel Deutsch, author of Inventing America's 'Worst' Family: Eugenics, Islam, and the Fall and Rise of the Tribe of Ishmael

"In Stepchildren of the Shtetl, Natan M. Meir connects everyday social experience to questions of political culture writ large, describing how the 'marginal' in Jewish society often came to serve as a figure for East European Jewry as a whole. An original and desperately needed book."

—Hillel J. Kieval, author of Languages of Community: The Jewish Experience in the Czech Lands

"This outstanding book offers us a glimpse at the underbelly of a Jewish community rarely studied from this vantage point. Meir tackles an elusive topic with analytic skill, keen sensitivity, and clear, accessible prose."

—Steven J. Zipperstein, author of Pogrom: Kishinev and the Tilt of History

"A book on the treatment of marginals in literature, history, and folklore smacks of brilliance....Meir has spotlighted a central aspect of Jewish life. His method of blending past images with present-day ideological concerns undoubtedly enlivens scholarship and offers a productive example for the profession."

"Meir's study of the poor, disabled, and mad in Jewish Eastern Europe is a landmark achievement, a book that establishes a neglected field.Healso makes a signal contribution to the field of disability history that will be of interest far beyond Jewish studies. Each chapter reveals historical gems. Highly recommended."

"Natan Meir's Stepchildren of the Shtetl is a remarkable work. Drawing from Hebrew, Yiddish, Russian, Ukrainian, and Polish sources, equally anchored in the deep recesses of the Jewish past and the latest innovations in disability and gender studies, Meir has given us as much of a glimpse into the margins of east European Jewry as possible. And he links what he finds to the larger story of the Jews at this juncture: the tortuous and ambivalent entry of a historically Othered people into a modernizing region of Europe that often continued to see its Jews as marginal."