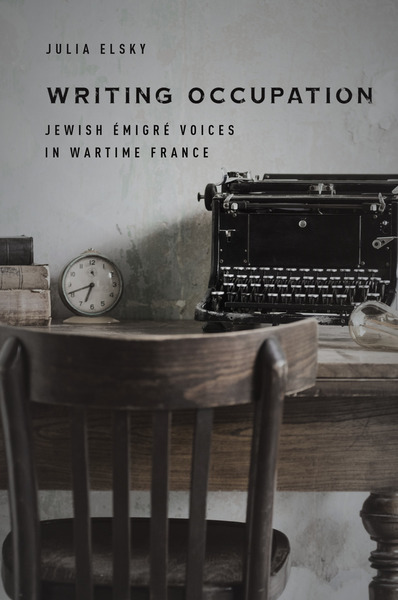 Among the Jewish writers who emigrated from Eastern Europe to France in the 1910s and 1920s, a number chose to switch from writing in their languages of origin to writing primarily in French, a language that represented both a literary center and the promises of French universalism. But under the Nazi occupation of France from 1940 to 1944, these Jewish émigré writers—among them Irène Némirovsky, Benjamin Fondane, Romain Gary, Jean Malaquais, and Elsa Triolet—continued to write in their adopted language, even as the Vichy regime and Nazi occupiers denied their French identity through xenophobic and antisemitic laws. In this book, Julia Elsky argues that these writers reexamined both their Jewishness and their place as authors in France through the language in which they wrote.

The group of authors Elsky considers depicted key moments in the war from their perspective as Jewish émigrés, including the June 1940 civilian flight from Paris, life in the occupied and southern zones, the roundups and internment camps, and the Resistance in France and in London. Writing in French, they expressed multiple cultural, religious, and linguistic identities, challenging the boundaries between center and periphery, between French and foreign, even when their sense of belonging was being violently denied.

"In this fine book, Elsky discusses five Jewish writers who explored the possibilities of writing in a 'Jewish voice' in French and grappled with issues of Jewish belonging during Vichy. Written in a clear and graceful style and based on original archival research, Writing Occupation will be of interest not only to historians and scholars of French literature, but to all those concerned by the fate of Jews in France, before and after the Second World War."

—Susan Rubin Suleiman, author of The Némirovsky Question: The Life, Death, and Legacy of a Jewish Writer in Twentieth-Century France

"Jews are the quintessential people not only of the book, but of multiple languages. Living in several worlds simultaneously, language becomes 'a province without a nation,' as Julia Elsky writes in this book. Her brilliant and highly original study of Jewish exiles living in France during World War II shows us that multilingualism demonstrates the porousness of national boundaries and serves as a crucial vehicle for exploring the multifaceted complexities of Jewish identity."

—Susannah Heschel, author of The Aryan Jesus: Christian Theologians and the Bible in Nazi Germany

"Writing Occupation is a welcome addition to a growing body of literature focused on the rich hybrid culture created by immigrant and first-generation Jews in early twentieth-century France. Julia Elsky's nuanced and perceptive book draws important parallels between immigrant Jewish and postcolonial francophone writers and will be of great interest to historians and literary scholars alike."

—Nadia Malinovich, author of French and Jewish: Culture and the Politics of Identity in Early Twentieth-Century France

"Elsky demonstrates that the writers in her corpus destabilize the binaries of centre/periphery, native/non-native, outsider/insider, and major literature/minor literature. She also highlights the simultaneous universalism and particularism marking these writers' work, and the plurality of their identities stemming from their multilingualism, sense of belonging to multiple countries, political allegiances, and (dis)engagement with Judaism."

"Elsky's study of these Jewish Émigré Voices in Wartime France will be read with pleasure by researchers, instructors, and students, for the rich knowledge and insights it offers. One of its most refreshing aspects lies in her insistence on analyzing writers, texts, and contexts in all their complexity, firmly resisting ready-made labels, categorical judgments, and predetermined theories and ideologies. While the facts never 'speak for themselves,' they do prove stubbornly important and indispensable, particularly when they are so coherently and judiciously incorporated into specific readings and comparative assessments, as is the case here."

"Julia Elsky has provided a model of Jewish studies scholarship inWriting Occupation. Working at the intersection of history, literary studies, and Holocaust studies, the book articulates innovative questions about language, identity, and the Second World War in France. Clearly written with thorough analysis that engages with key themes, the book underlines the complexities of multilingualism in writing and in lives. It also raises potential future avenues of exploration including analysis of gendered voices and further examinations of the ways in which language plays a role in identity."

Jean Malaquais and the life of a novel