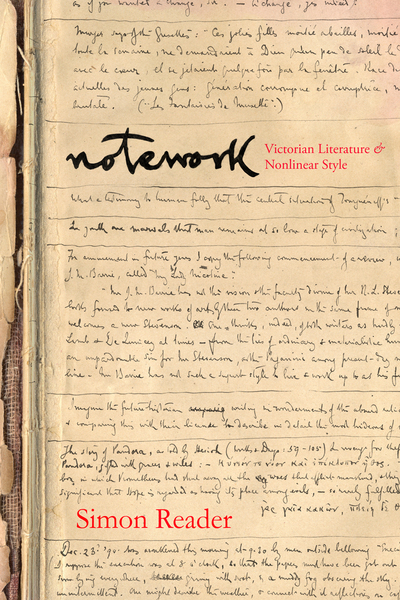 Notework begins with a striking insight: the writer's notebook is a genre in itself. Simon Reader pursues this argument in original readings of unpublished writing by prominent Victorians, offering an expansive approach to literary formalism for the twenty-first century. Neither drafts nor diaries, the notes of Charles Darwin, Oscar Wilde, Gerard Manley Hopkins, Vernon Lee, and George Gissing record ephemeral and nonlinear experiences, revealing each author's desire to leave their fragments scattered and unused.

Presenting notes in terms of genre allows Reader to suggest inventive new accounts of key Victorian texts, including The Picture of Dorian Gray, On the Origin of Species, and Hopkins's devotional lyrics, and to reinterpret these works as meditations on the ethics of compiling and using data. In this way, Notework recasts information collection as a personal and expressive activity that comes into focus against large-scale systems of knowledge organization. Finding resonance between today's digital culture and its nineteenth-century precursors, Reader honors our most disposable, improvised, and fleeting written gestures.

Simon Reader is Assistant Professor of English at the College of Staten Island, City University of New York.

"Encountering writers' notebooks on their own terms, Simon Reader carves out fresh and rewarding territory in the landscape of Victorian studies. Notework offers brilliant, wide-ranging commentary on little-studied archival materials in dialogue with, but not subordinated to, well-known works of the period."

"Written in an energetic, witty, and clear style, Notework is full of interest and fresh insight—an unexpected and provocative view on material that has wider implications for how we read."

"Contrasting with the disjointed fragments he quotes, Reader's own fluent and energetic style guides us through discussions of formalism generally, and Formalism in particular, into the direct engagement that he promises."

"Notework offers a major contribution to the genre theory and the history of reading because it makes valuable, really for the first time, an absolutely ubiquitous practice... Reader's approach can return us to the archive and attune us beyond the canon because it so profoundly values formal multiplicity."

"Critics often view authorial notes as adjunct to the study of major works, and this purpose is still central. However, Reader contends, in addition to providing insight into the creative process, notes serve as a distinct body of literary work... Incidentally, his observations about the disconnected nature of communication in social media (think Twitter) lead one to wonder how these instances of "note work" might figure as a genre to future readers."