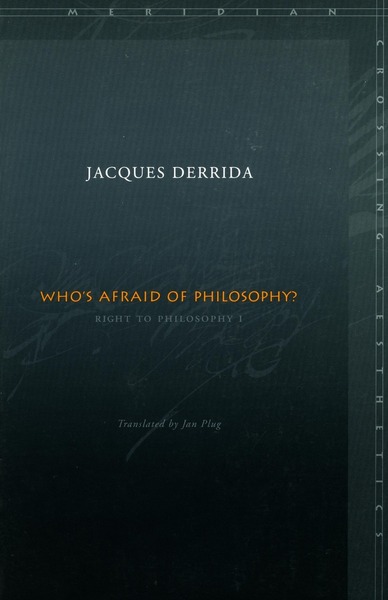 This volume reflects Jacques Derrida's engagement in the late 1970s with French political debates on the teaching of philosophy and the reform of the French university system. He was a founding member of the Research Group on the Teaching of Philosophy (Greph), an activist group that mobilized opposition to the Giscard government's proposals to "rationalize" the French educational system in 1975, and a convener of the Estates General of Philosophy, a vast gathering in 1979 of educators from across France.

While addressing specific contemporary political issues on occasion, thus providing insight into the pragmatic deployment of deconstructive analysis, the essays deal mainly with much broader concerns. With his typical rigor and spark, Derrida investigates the genealogy of several central concepts which any debate about teaching and the university must confront.

Thus there are essays on the "teaching body," both the faculty corps and the strange interplay in the French (but not only the French) tradition between the mind and body of the professor; on the question of age in teaching, analyzed through a famous letter of Hegel; on the class, the classroom, and the socio-economic concept of class in education; on language, especially so-called "natural languages" like French; and on the legacy of the revolutionary tradition, the Estates General, in the university. The essays are linked by the extraordinary care and precision with which Derrida undertakes a political intervention into, and a philosophical analysis of, the institutionalization of philosophy in the university.

Jacques Derrida was Director of Studies at the Ecole des Hautes Etudes en Sciences Sociales, Paris, and Professor of Humanities at the University of California, Irvine. Stanford has published twelve of his books, most recently Without Alibi (2002) and Negotiations: Interventions and Interviews, 1971-2001 (2002).

“This book is of extraordinary importance. It collects one of the most important and underappreciated aspects of Derrida’s work - his investigations into the institutions of philosophical research and teaching - in a definitive and comprehensive volume. These essays are crucial to an understanding of Derrida, and their publication in English is a milestone.”—Thoman Keenan, Bard College