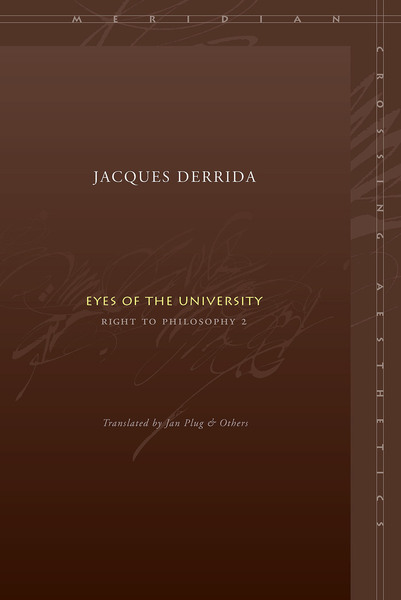 Eyes of the University
Right to Philosophy 2
Jacques Derrida, Translated by Jan Plug and Others
SERIES: Meridian: Crossing Aesthetics

Completing the translation of Derrida's monumental work Right to Philosophy (the first part of which has already appeared under the title of Who's Afraid of Philosophy?), Eyes of the University brings together many of the philosopher's most important texts on the university and, more broadly, on the languages and institutions of philosophy.

In addition to considerations of the implications for literature and philosophy of French becoming a state language, of Descartes' writing of the Discourse on Method in French, and of Kant's and Schelling's philosophies of the university, the volume reflects on the current state of research and teaching in philosophy and on the question of what Derrida calls a "university responsibility."

Examining the political and institutional conditions of philosophy, the essays collected here question the growing tendency to orient research and teaching towards a programmable and profitable end. The volume is therefore invaluable for the light it throws upon an underappreciated aspect of Derrida's own engagement, both philosophical and political, in struggles against the stifling of philosophical research and teaching.

As a founding member of the Research Group on the Teaching of Philosophy and as one of the conveners of the Estates General of Philosophy, Derrida was at the forefront of the struggle to preserve and extend the teaching of philosophy as a distinct discipline, in secondary education and beyond, in the face of conservative government education reforms in France. As one of the founders of the Collège International de Philosophie, he worked to provide a space for research in and around philosophy that was not accepted or legitimated in other institutions. Documenting and reflecting upon these engagements, Eyes of the University brings together some of the most important and incisive of Derrida's works.

Jacques Derrida was Director of Studies at the Ecole des Hautes Etudes en Sciences Sociales and Professor of Humanities at the University of California, Irvine. Among his many works published in English are Who's Afraid of Philosophy? Right to Philosophy 1 (Stanford, 2002), Negotiations (Stanford, 2002), and Without Alibi (Stanford 2002).

"From each of these punctual documents, supplemented by numerous helpful translator's notes, emerges the clear profile of Derrida's principled and relentless commitment to the teaching of philosophy as a right in any democracy worthy of the name."

"Some books recommend themselves by what is written therein; others are to be recommended for what they may inspire their readers to think, say, and do. Few books fall into both categories; the collection of pieces that is Eyes of the University does. But here, near the end, I have chosen my words carefully: "what they may inspire." The rest is up to us."