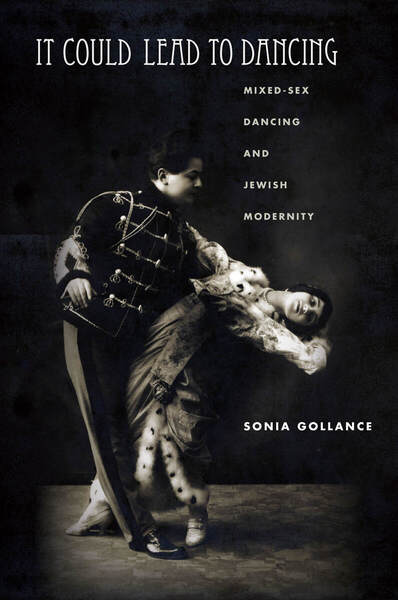 It Could Lead to Dancing
Mixed-Sex Dancing and Jewish Modernity
Sonia Gollance
SERIES: Stanford Studies in Jewish History and Culture

Winner of the 2022 Choice Award for Outstanding Academic Title, sponsored by the American Library Association.

Dances and balls appear throughout world literature as venues for young people to meet, flirt, and form relationships, as any reader of Pride and Prejudice, War and Peace, or Romeo and Juliet can attest. The popularity of social dance transcends class, gender, ethnic, and national boundaries. In the context of nineteenth- and twentieth-century Jewish culture, dance offers crucial insights into debates about emancipation and acculturation. While traditional Jewish law prohibits men and women from dancing together, Jewish mixed-sex dancing was understood as the very sign of modernity––and the ultimate boundary transgression.

Writers of modern Jewish literature deployed dance scenes as a charged and complex arena for understanding the limits of acculturation, the dangers of ethnic mixing, and the implications of shifting gender norms and marriage patterns, while simultaneously entertaining their readers. In this pioneering study, Sonia Gollance examines the specific literary qualities of dance scenes, while also paying close attention to the broader social implications of Jewish engagement with dance. Combining cultural history with literary analysis and drawing connections to contemporary representations of Jewish social dance, Gollance illustrates how mixed-sex dancing functions as a flexible metaphor for the concerns of Jewish communities in the face of cultural transitions.

Sonia Gollance is Lecturer in Yiddish at University College London. She has previously held appointments at the University of Vienna and The Ohio State University.

"It Could Lead to Dancing is a fascinating exploration of the role of dance in literary representations of Jewish modernization and secularization. With sources from memoirs to dance history, focusing primarily on German and Yiddish fiction, this wonderful, immensely learned, and original book will attract interest among literary scholars and beyond."

"Extensively researched and deftly written, Sonia Gollance's rich study guides us through a nuanced cultural history of Jewish mixed-sex dancing from the long nineteenth century into the present day. It Could Lead to Dancing confirms the importance of the Jewish perspective in literary dance studies, casting light on the dance floor as a site where social comportment reflected the political pursuits of acculturation, emancipation, and female empowerment."

"What is arguably the most important aspect of Gollance's book... is its tackling one of the most well-known, yet little examined, topics of Jewish culture—the place of mixed-sex dancing in Jewish life, where mixed-sex dancing relates to social or vernacular dancing between men and women. ... what she aims to prove, and does so very effectively, is that tracing the existence of mixed-sex dancing... is not only about witnessing changing ideas of sexuality but how Jews addressed the radical transformations arising from modernity during the period spanning from the Enlightenment to World War II... These shifts relate to gender roles, secularization, debates about Jewish emancipation, urbanization, migration, and war."

—Naomi Jackson, In geveb: A Journal of Yiddish Studies

"The mixed-sex dance scene, as Gollance successfully argues, is not only a plot device but an aesthetic choice. As such,It Could Lead to Dancing guides readers through a history of dance as both a cultural-historical subject and literary practice that will enhance the work of scholars and Jewish dance activists alike."

"Like the dance floor, 'a liminal space that eludes all kinds of boundaries,' Gollance... uncovers a field of cultural production that crosses and exposes linguistic and social borders (12). It is a contested field that renders new perspectives on the animating tensions of Jewish modernity."

The Other Side of Summer Weddings

In Geveb: A Journal of Yiddish Studies
[ More links ]
More in Jewish Studies