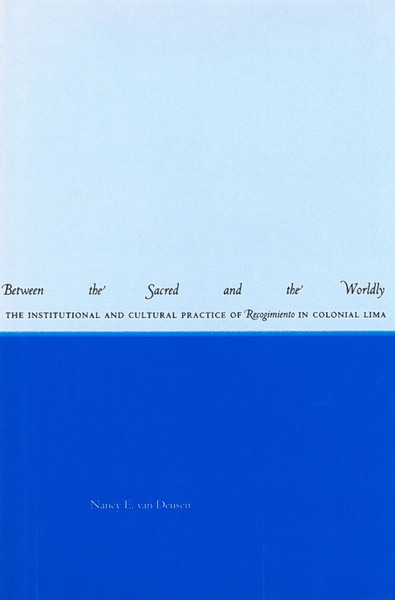 Between the Sacred and the Worldly
The Institutional and Cultural Practice of Recogimiento in Colonial Lima
Nancy E. van Deusen

This groundbreaking work argues that the seminal concept of recogimiento functioned as a metaphor for the colonial relationship between Spain and Lima. Ubiquitous and flexible, recogimiento had three related meanings—two cultural and one institutional—that developed over a 200-year period in Renaissance Spain and the viceregal capital, Lima. Female and male religious conceptualized recogimiento as a mystical praxis that aspired toward "union" with God, and it was also articulated as a fundamental virtue of enclosure and quiescent conduct for women. As an institutional practice, recogimiento involved substantial numbers of women and girls living in convents, lay pious houses, schools, and institutions (called recogimientos) that admitted schoolgirls, prostitutes, women petitioning for divorce, and the spiritually devout. In a broader sense, practices of recogimiento both conformed to and transgressed imagined boundaries of the sacred and the worldly in colonial Lima.

Recogimiento also reflected the process of transculturation, or the adaptation of particular cultural values to local contingencies. Through an analysis of more than 600 ecclesiastical litigation suits, and drawing on an impressive array of primary and secondary sources, the author shows how recogimiento was experienced by a range of individuals: from viceroys and archbishops to female foodsellers, shop owners, and secluded mystics. She argues that by 1650 women representing different races and classes in Lima claimed recogimiento as integral to their public, familial, and internal identities.

The social and cultural history of Lima between 1550 and 1713 illustrates the complexities of conjugal relations, sexuality, and social norms in the viceregal capital, demonstrates the inextricable link between sacred and secular realms in colonial society, and delineates the process of transculturation between Spain and Lima.

"This is the first comprehensive study in English of an institution and concept often referred to but rarely analyzed in a rigorous manner. The author provides an innovative and powerful portrayal of the development and practice of recogimiento. . . . Full of vivid detail, the book brings to life the importance of recogimiento both to women and men of colonial Lima and to colonial society in general."

Lima. . . . Recommended for graduate students and above."

"The admirable breadth of research and the scope of van Deusen's argument yield a variety of insightful observations about the connections between Lima's history of gender and early modern religiousity in Spain and Italy."

"Culling an impressive range and number of primary sources—from ecclesiastical litigation records and foundation papers for recogimiento houses to theological tracts and moral treatises—van Deusen paints a highly sophisticated, nuanced portrait of how a single concept and practice permeated colonial society in Lima"

"This work greatly enriches Latin American social history and opens the door to many new studies on the place of women in colonial society."