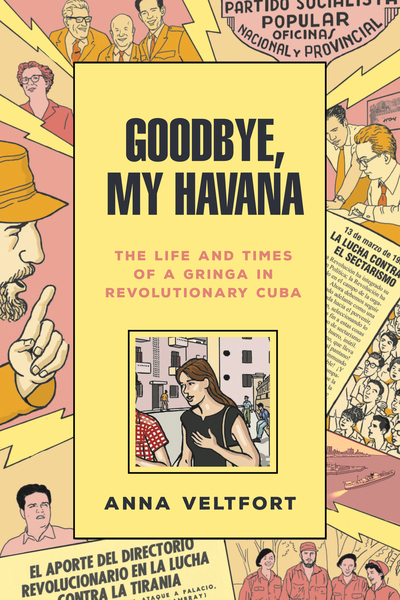 An eyewitness account of idealism, self-discovery, and loss under one of the twentieth-century's most repressive political regimes

Set against a backdrop of world-changing events during the headiest years of the Cuban Revolution, Goodbye, My Havana follows young Connie Veltfort as her once relatively privileged life among a community of anti-imperialist expatriates turns to progressive disillusionment and heartbreak. The consolidation of Castro's position brings violence, cruelty, and betrayal to Connie's doorstep. And the crackdown that ultimately forces her family and others to flee for their lives includes homosexuals among its targets—Connie's coming-of-age story is one also about the dangers of coming out. Looking back with a mixture of hardheaded clarity and tenderness at her alter ego and a forgotten era, with this gripping graphic memoir Anna Veltfort takes leave of the past even as she brings neglected moments of the Cold War into the present.

Anna Veltfort is a graphic designer and illustrator who lives in New York.

"Anna Veltfort's graphic novel is both historically important and utterly engaging. Her early life, in which she brushed shoulders with Fidel Castro and Che Guevara while navigating the dangers of a hidden queer existence, is portrayed in exquisite, uncompromising, and impeccably researched detail, all in the 'clear line' style of Hergé's Tintin. This remarkable and heartfelt book is a loving ode to Cuba, a cautionary tale about the politics of oppression, and proof positive that the personal is always political and the political always personal."

"With clear and striking images, Veltfort's insider/outsider view of 1960s Cuba offers a resonant glimpse into an often misunderstood time and place. From moment to moment, readers will find themselves both riveted and wonderfully informed."

—Chantel Acevedo, author of The Distant Marvels: A Novel

"The combination of features that make Veltfort's experience and its representation here unique is mindboggling. This story of a woman and a nation simultaneously coming of age, their histories inextricably bound together during each of their most formative years, is like no other book I know of."

"A lovely and sensitive graphic memoir that retraces the life experiences of a thoughtful young woman trying to find her own way among ambivalent Cubans and sanctimonious expats in the early days of revolutionary Cuba. I rooted for Anna on every page."

"The drawings are meticulous and brilliantly colored, many accompanied by historical documents, lending great authenticity to the work as a snapshot of the time....[The] work is undeniably unique and effective in recreating not only the socioeconomic scarcity but the reigning political paranoia and the social anxiety felt by any dissenter resisting the government's aspirations for the isle at that time."

"Veltfort was 16 years old in 1962 when her communist parents moved her family from the San Francisco Bay Area to Havana; her insightful memoir relates anecdotes from those heady days when both she and Cuba changed rapidly....Among often partisan portrayals of Cuba, Veltfort's memoir of a rare life's triumphs and tragedies stands out for its nuanced portrayal."

"While it's easy to lose sight of the stories of individuals within the grand narratives of geopolitics,Goodbye, My Havana succeeds in focusing its attention on the lives that affect and are affected by this moment in history....a resonant reminder that social movements are not defined by the rhetoric of their leaders, but by the freedoms afforded or denied to those communities that society most often marginalizes."

"[Anna Veltfort] opens up with first-person charm and, she makes us feel, honesty.she makes terrific use of the compositional and collage possibilities of the graphic form."

"Goodbye, My Havana portrays love on multiple levels: the natural love between humans, the eternal love of humans for art, and the patriotic love shaped by the revolutionary state... Veltfort shows the human cost of this unilateral, obligatory love."

"Anna Veltfort's Goodbye, My Havana is one of the most important and innovative books about Cuba to be published recently. A graphic designer and illustrator, Anna Veltfort has produced a graphic memoir that is riveting and visually enticing. After such a long literary silence, she gets to tell her own story. And what a story it is."