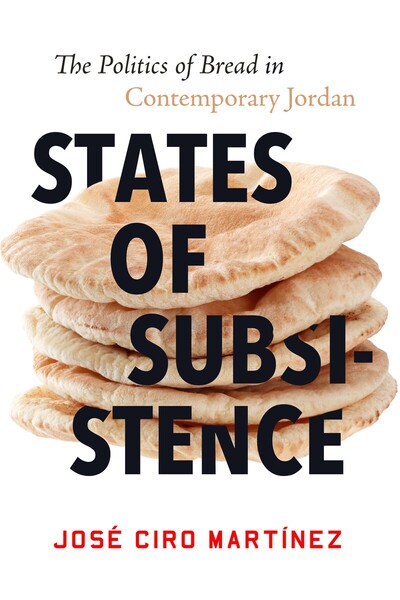 On any given day in Jordan, more than nine million residents eat approximately ten million loaves of khubz 'arabi—the slightly leavened flatbread known to many as pita. Some rely on this bread to avoid starvation; for others it is a customary pleasure. Yet despite its ubiquity in accounts of Middle East politics and society, rarely do we consider how bread is prepared, consumed, discussed, and circulated—and what this all represents. With this book, José Ciro Martínez examines khubz 'arabi to unpack the effects of the welfare program that ensures its widespread availability.

Drawing on more than a year working as a baker in Amman, Martínez probes the practices that underpin subsidized bread. Following bakers and bureaucrats, he offers an immersive examination of social welfare provision. Martínez argues that the state is best understood as the product of routine practices and actions, through which it becomes a stable truth in the lives of citizens. States of Subsistence not only describes logics of rule in contemporary Jordan—and the place of bread within them—but also unpacks how the state endures through forms, sensations, and practices amid the seemingly unglamorous and unspectacular day-to-day.

José Ciro Martínez is Lecturer in Politics at the University of York and Junior Research Fellow at Trinity College, University of Cambridge.

"Original, lucidly written, and theoretically rigorous, this rich ethnography tells us how to find the state in a quite unexpected place: the bakery. An outstanding book."

—John Chalcraft, London School of Economics, author of Popular Politics in the Making of the Modern Middle East

"The exciting States of Subsistence not only challenges how we think about state power in Jordan, but offers a nuanced reading of the literature on state power and an original theoretical approach. José Ciro Martínez provides a roadmap for examining quotidian practices of state power in democracies and non-democracies alike."

"Beautifully written, rich in ethnographic detail, States of Subsistence examines the constitution of the state at a novel site: the bakery. Drawing on remarkable access to the inner workings of both bakeries and government bureaucracy, José Ciro Martínez offers a nuanced account of how subsidized bread figures in people's everyday lives and encounters with the state."

"Jose Ciro Martinez's brilliant new book,States of Subsistence, largely sets aside those dominant questions of bread riots, food security, regime survival and economic reforms to craft a uniquely important and absolutely fascinating look into the political meaning of the lived experience of subsidized bread in Jordan."

"In this fascinating book, [Martínez] reveals the extent to which the bread subsidy is intimately woven into the economic, social, and political life of the kingdom."