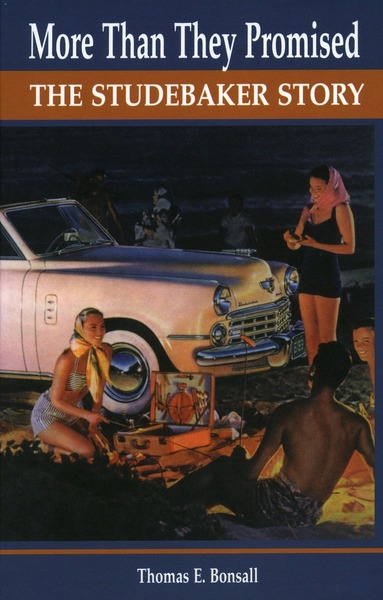 More Than They Promised
The Studebaker Story
Thomas E. Bonsall

This lavishly illustrated book on the famous automobile manufacturer traces the Studebaker family from its arrival in America in 1736, to the beginnings of the wagon business under John M. Studebaker and his brothers in the nineteenth century, to the family’s entry into the automobile industry in 1902, to the last Studebaker automobile to roll off the assembly line in 1966.

The book, however, is much more than the story of a family business; it is also, in microcosm, the story of the industrial development of America. The Studebakers had always been industrialists in the sense that they made their living by manufacturing things, albeit on a small scale. When the Industrial Revolution hit the country with full force, spurred on by the Civil War, it transformed America from a rural-agrarian society into an urban-industrial one. The fortunes of the Studebaker family were transformed with it.

As the title suggests, the Studebaker story was mostly one of success. Studebaker wagons and carriages were long noted for their quality and popularity, and so, too, were Studebaker automobiles. The 1953 Starliner and the 1963 Avanti, designed under Raymond Loewy’s direction, are widely regarded as among the most innovative examples of American industrial design.

The book deals in detail with the soaring prosperity of the company in the 1920s, the bankruptcy and miraculous recovery in the 1930s, the stupendous success of the early post-World War II period, and the eventual decline of the company’s fortunes in the mid-1950s. It describes the development of such famous models as the Lark, Avanti, and Gran Tourisimo Hawk, with special attention paid to the Avanti II, a surprisingly successful spinoff from the dying company that continued to be produced until 1991. The final chapter, on why Studebaker died, is tightly reasoned and more convincing than previous theories. Throughout, the author has used personal incident and characterization to bring to life the rich, tumultuous history of one of America’s longest enduring industrial empires.

Thomas E. Bonsall is one of America's most respected automotive historians. He is the author of The Lincoln Motorcar (1981, 1993), winner of both national awards for automotive history writing, the Cugnot Award of the Society of Automotive Historians and the McKean Cup of the Antique Automobile Club of America. Pontiac: They Built Excitement (1991) won the Cugnot Award. Avanti! (1978, 1994) is the only comprehensive history of the Avanti and Avanti II.

"The result of a prodigious amount of research and admirably organized, this is the fullest and most detailed account of the Studebaker automobile."

"Many books have chronicled the Studebaker story, but this one by noted automotive historian Thomas Bonsall is undoubtedly the definitive work. . . . More Than They Promised: The Studebaker Story is a worthy investment for anyone who wants a complete and highly accurate history of one of America's longest lasting industrial giants."

"Bonsall has not only found new approaches to the subject, but sheds fresh light on the oft-rehearsed reasons for the Edsel's death. The book is well written, flows nicely, and artfully mixes personalities and corporate policies. It adds a great deal to our understanding of one of the 20th century's biggest corporate disasters."

—James A. Ward, University of Tennessee at Chatanooga

"This is a carefully researched and detailed overview of what might be termed the "Studebaker Empire". . .a story dating from Studebaker's first wagons of 1852 to its cars built through 1966, to the last cars assembled in Hamilton, Ontario. . . . You may already have one or more books on Studebaker. . .there have been several. But More Than They Promised is another story. And it's a good one."

"As we face another round of consolidation in the global automobile industry, the story of Studebaker and its exit from vehicle assembly in the 1960s is of particular interest. . . . Bonsall has produced a readable history of the company. Organised around the 'great' men who ran Studebaker, the volume's strength is its discussion of product design and philosophy. . . . [The] volume is a useful addition to the business history literature. . . ."

"Thomas Bonsall, a well-known author among antique car enthusiasts, brings considerable knowledge of automobile history to this telling of the rise and fall of the Studebaker Corporation, a company whose history spanned over a hundred years. This is not the first history of Studebaker, but readers will find information not covered in other histories of the company."