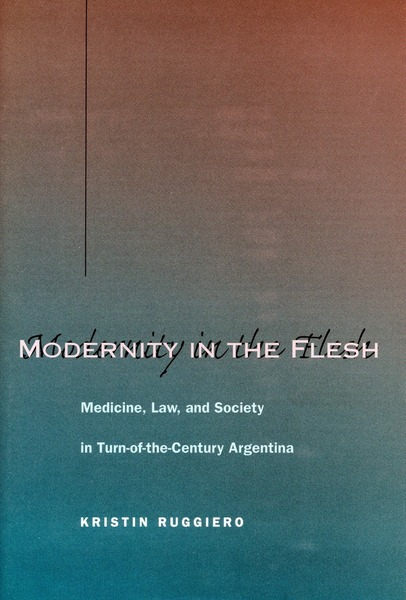 Modernity in the Flesh
Medicine, Law, and Society in Turn-of-the-Century Argentina
Kristin Ruggiero

This book examines the lives of people caught in the dynamics of changing mores, rapid urbanization, and real public health issues in nineteenth-century Buenos Aires. Modernity in the Flesh shows the costs Argentines paid for the establishment of liberal democracy between 1880 and 1910. Modernity raised consciousness of the public good and a commitment to new sciences and a new set of priorities that asserted the precedence of health and security of the social whole. This book shows the ways that the tensions of liberal democracy between individual rights and the social good were tempered by "flesh" and articulated through this word. As the state was pursuing positivist science and government, the flesh held out a type of corrective to the focus on scientific and material progress.

Kristin Ruggiero is Associate Professor of History and Director of the Center for Latin American and Caribbean Studies at the University of Wisconsin—Milwaukee.

"Ruggiero's manuscript is at its very best in its densely rich and colorful account of daily life in fin-de-siecle Buenos Aires. Indeed, the book is a tour de force of narrative detail, ranging widely across the urban landscape and providing a remarkable taxanomy of the various figures composing its diverse population."

"This fine study is an examination of the role of legal and medical thinking in the construction process of a modern state and the way a heterogeneous group of professionals have dealt with old and new issues, values, and ideas such as honor, passion, and tradition on the one hand, and science, individualism, and modernity on the other."

"This book is a fine study of the interaction between law and medicine in issues central to modernization, nationalism, society, and development. It deserves a wide audience."

—Bulletin of the History of Medicine

"As an interdisciplinary study, Modernity in the Flesh is a marvel. In order to explicate her court cases, Ruggiero tackles a broad spectrum of European and Argentine social sciences: sociology, criminology, penology, psychology, psychiatry, and law, to mention only the most central. Other historians have had similar ambitions, but she manages, as many others do not, to convey both the complexity and complementarity of the various discourses--on family, honor, gender, class, race, sexuality, contagion, degeneration, and passion--that bound these emerging disciplines together."