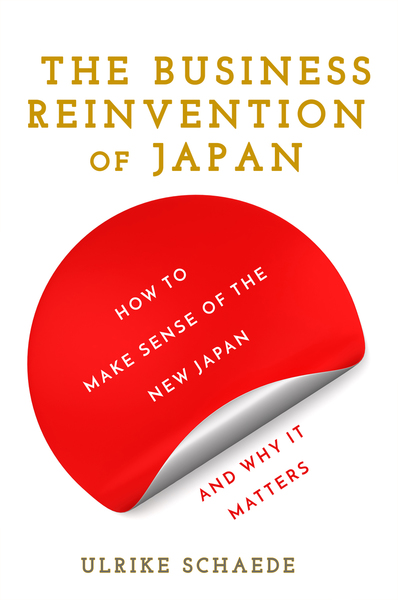 After two decades of reinvention, Japanese companies are re-emerging as major players in the new digital economy. They have responded to the rise of China and new global competition by moving upstream into critical deep-tech inputs and advanced materials and components. This new "aggregate niche strategy" has made Japan the technology anchor for many global supply chains. Although the end products do not carry a "Japan Inside" label, Japan plays a pivotal role in our everyday lives across many critical industries.

This book is an in-depth exploration of current Japanese business strategies that make Japan the world's third-largest economy and an economic leader in Asia. To accomplish their reinvention, Japan's largest companies are building new processes of breakthrough innovation. Central to this book is how they are addressing the necessary changes in organizational design, internal management processes, employment, and corporate governance. Because Japan values social stability and economic equality, this reinvention is happening slowly and methodically, and has gone largely unnoticed by Western observers. Yet, Japan's more balanced model of "caring capitalism" is both competitive and transformative, and more socially responsible than the unbridled growth approach of the United States.

Ulrike Schaede is Professor of Japanese Business at the School of Global Policy and Strategy, and Director of the Japan Forum for Innovation and Technology, at the University of California San Diego. She is the author of seven books, including Choose and Focus: Japanese Business Strategies for the 21st Century (2008).

"Ulrike Schaede's new book combines an invaluable primer on Japanese business culture with a striking analysis of Japan's little understood strategy for producing enduring economic strength based on manufacturing excellence and constant, managed change. I came away with renewed admiration for the country's political and corporate leadership, and Japan's ability to forge a successful economic future despite the many daunting challenges one often hears about."

"This authoritative and sophisticated account of how Japanese companies have quietly reformulated how they compete in the global economy is a timely reminder why we need to pay attention to Japan. Japanese companies and their technologies remain, and will continue to remain, critically relevant in our fast-changing world."

"For more than a generation, the outside world has been ready to write off Japan's economy as yesterday's story, in contrast to the tomorrows being created elsewhere, especially in China. Ulrike Schaede clearly and convincingly lays out how out-of-touch that judgment is—and how much more impressive the creativity, flexibility, and re-invention of the Japanese business system look when examined up close. The crispness and concision of the book make it a pleasure to read, and its originality will make it useful for anyone who wants to understand the next stage in global business."

"Schaede truly understands Japanese business strategy and culture. With deep insights and keen analysis, she offers an update on how Japanese companies are evolving to compete in the new global economy. And, she shows how they carefully harmonize social stability with economic success."

"Schaede's book offers an up-to-date, intriguing, rich, and easy to read account of changes in Japanese business over the last 20 years. As such, it deserves a wide readership and it will definitely enter my reading list for students."

"Japan's economy and its evolving business systems matter, and this insightful evaluation explains how and why. A definite read."

"Schaede's book not only advances our view of the possibilities for Japanese business reinventions on a variety of technology frontiers, but also the broader nature of linkages that underpin the prospects for prosperity and security in Asia and beyond."

The Japan Times
More in Business—Strategy