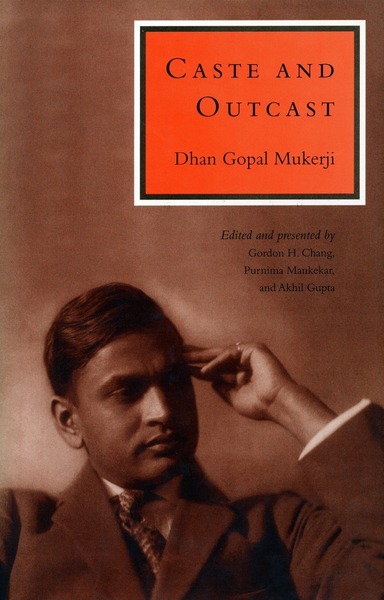 A person of rare talent and broad appeal, Dhan Gopal Mukerji (1890-1936) holds the distinction of being the first South Asian immigrant to have a successful career in the United States as a man of letters. As the author of two dozen published volumes of poetry, drama, fiction, social commentary, philosophy, translations, and children's stories, Mukerji was a pivotal figure in the transmission and interpretation of Indian traditions to Americans in the first several decades of the twentieth century. This reissue of his classic autobiography Caste and Outcast, with a new Introduction and Afterword, seeks to revitalize interest in Mukerji and his work and to contribute to the exploration of the South Asian experience in America.

Originally published in 1923, this book is an exercise in both cultural translation and cultural critique. In the first half of the book, Mukerji draws upon his early experiences as a Bengali Brahmin in India, hoping to convey to readers "an intimate impression of eastern life"; the second half describes Mukerji's coming to America and his experiences as a student, worker, and activist in California.

Mukerji's text, written in an engaging personal style, is the kind of ethnographic writing that seeks to render intelligible and familiar the unfamiliar and the exotic. Gordon H. Chang's substantial Introduction locates the story of Caste and Outcast within the larger context of Mukerji's life, tracing the author's personal history and his connections to such major figures as Jawaharlal Nehru, M. N. Roy, Van Wyck Brooks, Roger Baldwin, and Will Durant. The Afterword, by Purnima Mankekar and Akhil Gupta, examines the ways in which Mukerji stretches the limits of the autobiographical genre and provides a counternarrative to the dominant nationalist account of American society.

Karen Isaksen Leonard is Professor of Anthropology at the University of California, Irvine. She is the author of Social History of an Indian Caste: The Kayasths of Hyderabad(1978), Making Ethnic Choices: California's Punjabi Mexican Americans(1994), South Asian Americans(1997), and Muslims in the United States: The State of Research.(2003)

"A fascinating insight into the Asian-American world of the last century. Dhan Gopal Mukerji was a genuine pioneer, and his career brims with portents for the generation of Asian-American writers that is now coming into its own."

—Amitav Ghosh, Queen's College, CUNY, author of The Glass Palace and In an Antique Land

"This is a quirky and fascinating book—brilliant and exasperating in equal measure—which gives one a unique insight into theexperience of an Indian immigrant to the U.S. in the early 20th century, but which also addresses in many essential respects the experience of immigrants everywhere."

—Vikram Seth, author of A Suitable Boy and The Golden Gate

"Dhan Gopal Mukerji's Caste and Outcaste has long stood alone, a rare early 20th century testimony by a perceptive intellectual about his life in India and America. The reprint benefits greatly from the fine introduction by historian Gordon Chang and an elegant, thought-provoking essay by anthropologists Akhil Gupta and Purnima Mankekar. Mukerji's life and work are made meaningful once again."

—Karen Leonard, University of California at Irvine, author of The South Asian Americans

"A man who, through his writing, offered one of the earliest glimpses into the complexity of an educated immigrant's life in America. Through his observations and even through what he does not say, Mukerji at once lends his readers a sense of darkness and alienation, as well as great insight and literary skill."

"Caste and Outcast offers a fascinating glimpse into the life and times of a very early and seemingly reluctant Indian immigrant to America."

"[The book] brings to life what it meant to be an immigrant from the Indian subcontinent at a time when there were not too many like him even in California."

"Caste and Outcast is full of brilliant by-the-way snapshots of the life in India and America in the early 1920s and 1930s that Mujerki captures quite effortlessly."

"This book is full of merit."