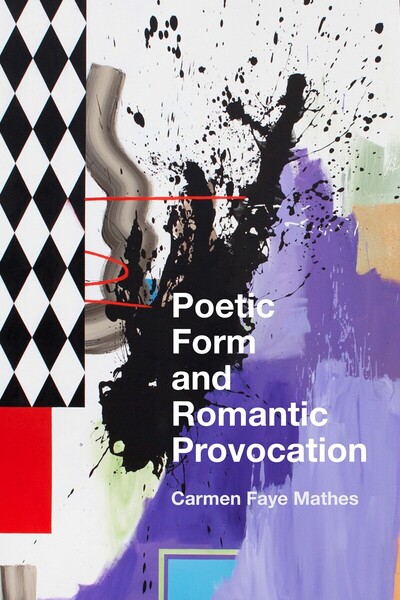 Critics have long understood the development of Romantic aesthetics as a turning point in the history of literary theory, a turn that is responsible for theories of mind and body that continue to inform our understandings of subjectivity and embodiment today. Yet the question of what aesthetic experience can "do" grates against the fact that much Romantic writing represents subjects as not actually in charge of the feelings they feel, the dreams they dream, or the actions they take.

In response to this dilemma, Poetic Form and Romantic Provocation argues that being moved contrary to one's will is itself an aesthetic phenomenon explored by Romantic poets whose experiments with poetic form and genre provoke unanticipated feelings through verse. By analyzing how Romantic poets intervene, affectively and aesthetically, in readerly expectations of form and genre, Mathes shows how provocations disrupt and invite, disturb and compel—interrupting or suspending or retreating in ways that ask readers to orient themselves, materially and socially, in relation to literary experiences that are at once virtual and embodied. Examining the formal tactics of Charlotte Smith, William Wordsworth, Samuel Taylor Coleridge, John Keats, and Percy Bysshe Shelley, alongside their reactions to historical events such as Toussaint Louverture's revolt and the Peterloo Massacre, Mathes reveals that an aesthetics of radical openness is central to the development of literary theory and criticism in Romantic Britain.