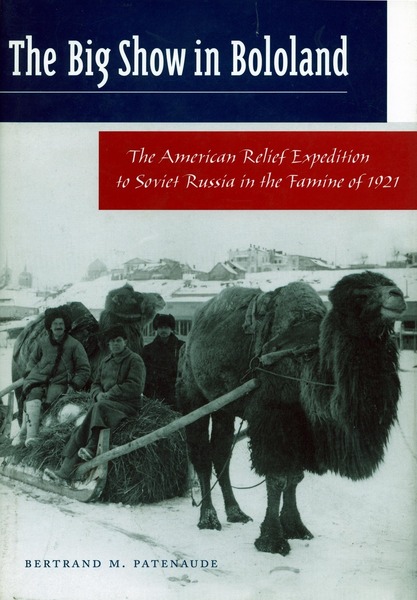 The Big Show in Bololand
The American Relief Expedition to Soviet Russia in the Famine of 1921
Bertrand M. Patenaude

Winner of the 2003 Marshall Shulman Book Prize, sponsored by the American Association for the Advancement of Slavic Studies.

When a devastating famine descended on Bolshevik Russia in 1921, the United States responded with a massive two-year relief mission that battled starvation and disease, and saved millions of lives. The nearly 300 American relief workers were the first outsiders to break through Russia’s isolation, and to witness and record the strange new phenomenon of Russia’s Bolshevism.

This epic tale is related here as a sprawling American adventure story, largely derived from the diaries, memoirs, and letters of the American participants, who were a colorful mix of former doughboys, cowboys, and college boys hungry for adventure in the wake of the Great War. The story is told in an anecdotal, even novelistic, style that is accessible to a broad readership. More than a fascinating historical narrative, the book serves as a political and social history of the aftermath of the Russian Revolution, and as a study of the roots of the fateful U.S.-Soviet rivalry that would dominate the second half of the twentieth century.

The book’s opening section of chapters recounts the chronological story of the American mission to Bolshevik Russia, dubbed by those who served as the “Big Show in Bololand.” It is followed by sections which examine the personal triumphs and tragedies of the relief workers and of their beneficiaries; the political confrontations between these emissaries of American capitalism and the Bolshevik commissars, who struggled to gain control over the relief effort; and the unique American-Russian cultural encounter occasioned by the presence of the relief workers, who came into daily contact with all classes of society—from impoverished former aristocrats to the poorest peasants.

Bert Patenaude is a historian, lecturer, and documentary filmmaker who specializes in Russian affairs. He is presently a lecturer in the History Department at Stanford University and a Research Fellow at the Hoover Institution, and he is the principal writer of "Utopia Revealed," a forthcoming five-part series for PBS on the history of socialism.

Patenaude is the editor of several books on Russian studies, including The Russian Revolution and Stalin and Stalinism. His film credits include associate producer of the Emmy Award-winning PBS film "Inside the USSR," the Frontline documentary "A Journey to Russia," and "Stalin's Ghost," an NBC News Special Report. He was educated at Boston College and the University of Vienna, and received his PhD in history from Stanford in 1987.

"Bert Patenaude has written a richly informative and unusually engaging book. In the history of a long-forgotten episode—the American famine relief effort in the new-born Soviet Union in 1921—he has found a template for understanding much of what transpired thereafter in the Soviet-American relationship. And he has done it with brio, marshalling a colorful cast of characters, Soviet as well as American—including especially Herbert Hoover who emerges in a fresh and intriguing light."

"This book is to be warmly welcomed as the first full, and admirably presented, account of this major crisis in Soviet history—important, too, as an American experience. Here is not only the dramatic story of the American rescue operation, but also of the astonishing confrontations between the lifesavers and those who resented and sabotaged them."

—Robert Conquest, author of The Great Terror and The Harvest of Sorrow: Soviet Collectivization and the Terror Famine

"This is a highly original and important work on a fascinating episode in American-Russian relations that has had little attention, either in America or in Russia. Patenaude has presented it brilliantly. What impresses one most about this work is the skill and imagination with which the author has captured so many dimensions of the American famine relief effort, and of a tragic period in Russian history. The literary style is outstanding, with vivid descriptions of events, people, and landscapes."

"Every generation has to learn history anew and in The Big Show in Bololand . . . .Bertrand M. Patenaude gives us a superb lesson . . . .Based on diaries, private letters and memoirs plus startling and disturbing photographs of the dead and dying, especially orphaned children, the book affords a shocking glimpse of Russia after the revolution."

"Patenaude must be congratulated for preparing a well-written, thoroughly researched, definitive study of the ARA in Russia."

"...an outstanding piece of history."

"This book is essential reading for any historian of the twentieth century."

"This spacious and engaging work provides far and away thebest account yet..."