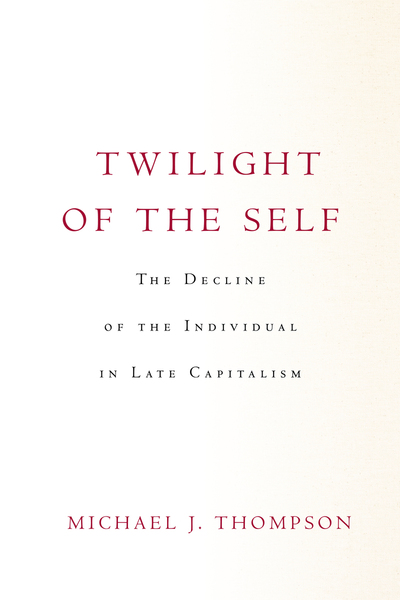 In this new work, political theorist Michael J. Thompson argues that modern societies are witnessing a decline in one of the core building blocks of modernity: the autonomous self.

Far from being an illusion of the Enlightenment, Thompson contends that the individual is a defining feature of the project to build a modern democratic culture and polity. One of the central reasons for its demise in recent decades has been the emergence of what he calls the "cybernetic society," a cohesive totalization of the social logics of the institutional spheres of economy, culture and polity. These logics have been progressively defined by the imperatives of economic growth and technical-administrative management of labor and consumption, routinizing patterns of life, practices, and consciousness throughout the culture. Evolving out of the neoliberal transformation of economy and society since the 1980s, the cybernetic society has transformed how that the individual is articulated in contemporary society. Thompson examines the various pathologies of the self and consciousness that result from this form of socialization—such as hyper-reification, alienated moral cognition, false consciousness, and the withered ego—in new ways to demonstrate the extent of deformation of modern selfhood. Only with a more robust, more socially embedded concept of autonomy as critical agency can we begin to reconstruct the principles of democratic individuality and community.

Michael J. Thompson is Professor of Political Theory at William Paterson University. He is the author of The Politics of Inequality (2007), The Domestication of Critical Theory (2016), and, most recently, The Specter of Babel: A Reconstruction of Political Judgment (2020).

"Thompson ranges confidently over philosophy, psychoanalysis, and economics in this thoughtful and original study of the individual in a mass society."

"Thompson is a preeminent scholar who has produced a controversial, interdisciplinary work that speaks to the future of the critical tradition. This is an innovative and important work that deserves to be read."