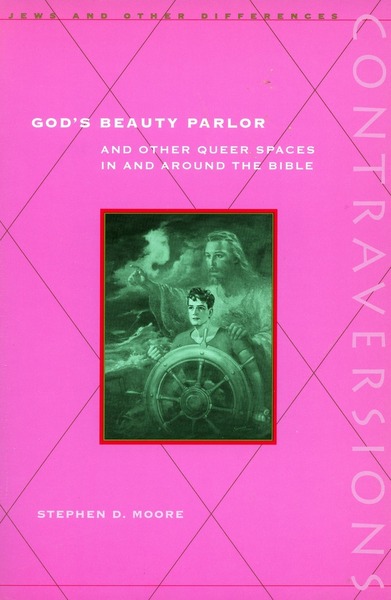 God’s Beauty Parlor
And Other Queer Spaces in and Around the Bible
Stephen D. Moore
SERIES: Contraversions: Jews and Other Differences

God's Beauty Parlor opens the Bible to the contested body of critical commentary on sex and sexuality known as queer theory and to masculinity studies. Through a series of dazzling rereadings staged not only in God's beauty parlor, but also in God's boudoir, locker room, and war room, the author pursues the themes of homoeroticism, masculinity, beauty, and violence through such texts as the Song of Songs, the Gospels, the Letter to the Romans, and the Book of Revelation.

He ponders such matters as the curious place of the Song of Songs in the history of sexuality, or how an apparent paean to male-female love became a pretext for literary cross-dressing for legions of male Jewish and Christian commentators; Jesus' face and physique in relation to ideologies of beauty, ranging from the patristic era, when the "earthly" Jesus was regularly represented as ugly, to the contemporary global culture industry, with its trademark equation of looks with worth; the gendered and sexual substratum of Paul's doctrine of salvation embedded in his most influential epistle—not least his gendering of righteousness as masculine and sin as feminine; and the intimate imbrication of masculinity and mass death in Revelation, a book about war making men making war-making men . . . some of whom also happen to be gods.

God's Beauty Parlor is an exhilarating attempt to bring some of the most significant currents in contemporary gender studies to bear on a text that, even in the post-Christian West, remains the ultimate cultural icon, cipher, and shibboleth.

Stephen D. Moore is Professor of New Testament at Drew University Theological School. His most recent book is God's Gym: Divine Male Bodies of the Bible.

"Too often the debate about the Bible and homosexuality is reduced to a dull episode of Crossfire. On the right, the Book of Romans condemns queers! On the left, the Book of Romans celebrates queers! In four essays Moore queers the debate for both sides, discussing the gay iconography of Jesus, the Song of Solomon, and the masculinity of the apostles as well as his own travels through the study of the good book. Deftly combining easy humor with academic theory, Moore turns up the disco music and hangs a mirror ball over the debate."

"For well over a decade Stephen D. Moore has served as a powerful advocate for the intercourse between biblical interpretation and contemporary critical theories. His latest book, God's Beauty Parlor, shares many of the characteristics that Moore's readers have come to expect from his work: a solid if often irreverent grounding in biblical scholarship; a penetrating awareness of the possible implications of utilizing those methods and theories as resources for reading the Bible; and a prose style that is engaging, frequently humorous, and clear but seldom simplistic."