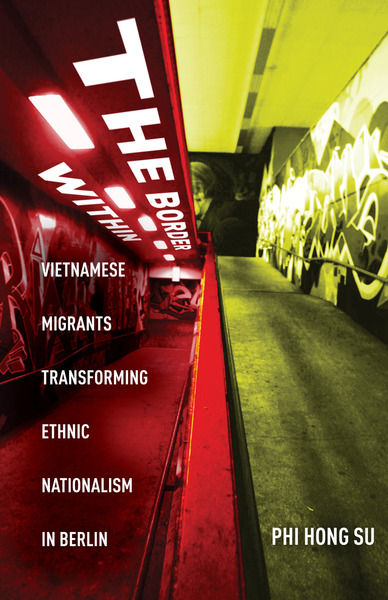 When the Berlin Wall fell, Germany united in a wave of euphoria and solidarity. Also caught in the current were Vietnamese border crossers who had left their homeland after its reunification in 1975. Unwilling to live under socialism, one group resettled in West Berlin as refugees. In the name of socialist solidarity, a second group arrived in East Berlin as contract workers. The Border Within paints a vivid portrait of these disparate Vietnamese migrants' encounters with each other in the post-socialist city of Berlin. Journalists, scholars, and Vietnamese border crossers themselves consider these groups that left their homes under vastly different conditions to be one people, linked by an unquestionable ethnic nationhood. Phi Hong Su's rigorous ethnography unpacks this intuition. In absorbing prose, Su reveals how these Cold War compatriots enact palpable social boundaries in everyday life. This book uncovers how 20th-century state formation and international migration—together, border crossings—generate enduring migrant classifications. In doing so, border crossings fracture shared ethnic, national, and religious identities in enduring ways.

Phi Hong Su is a Visiting Assistant Professor of Sociology at Williams College. Previously, she was a Postdoctoral Research Associate in the Division of Social Science at New York University Abu Dhabi.

"Phi Hong Su's The Border Within is a game-changing book. Using rich ethnographic data with Vietnamese refugees and former contract workers in a reunified Berlin, Su paints a vivid portrait of how national and ethnic categories play out in everyday life. Avoiding simplistic conceptions of these categories, Su takes us into the lives of her subjects as they adopt and transform national and ethnic categories to draw lines of unity and division. This book is essential reading for anyone who hopes to understand how migration, war, and changing political boundaries influence belonging."

"A vivid account of Vietnamese border crossings – social, national, and political – that reconceptualizes the diaspora and notions of ethnonationalism. Su's remarkable study of the diverse pathways of Vietnamese migration to the once-divided city of Berlin serves as a poignant reminder of the ways in which Cold War divisions continue to shape daily lives and raise complex questions of belonging."

"In this remarkable book, Phi Hong Su poignantly analyzes what it means to be Vietnamese in the context of migration between two countries that were profoundly affected by war, national division, and reunification. Having originated decades ago, the Vietnamese community in Germany today continues to confront the impact of violence, division, and reunification on community, ethnic, national, and individual identities. Su deftly unpacks how discrepant histories of borders and border crossings within a coethnic migrant group shape ethnic nationalisms through social relationships and religious practices. The book makes a groundbreaking contribution to transnational studies of Asia and the Asian diaspora."

"The field of postcolonial studies has long been concerned with issues of cultural hybridity, national belonging, and political sovereignty. Phi Hong Su's The Border Within: Vietnamese Migrants Transforming Ethnic Nationalism in Berlin tackles all these weighty matters with a remarkable deftness that bridges divergent interests in decolonization, global migration, [and] the Cold War.... The Border Within is a major text for anyone who wishes to grasp the social forces that delimit postcolonial and diasporic identities. This important study reveals how nations are made, unmade, and remade with an understanding that the path to independence and freedom is riddled with endless controversy."

"Phi Hong Su asks a question of enduring interest to migration scholars and students of nationalism: How do ordinary people, thousands of miles from their homeland, make sense of their membership in a distant nation? Su adds two absorbing, creative wrinkles to this question by using a research design that sets The Border Within apart from prior scholarship...Su is both courageous and empathetic in the way she deals with the internal politics of the Vietnamese, their notions of ethnic nationalism, and their lives in Germany...These questions point to how fascinating and generative it is to read The Border Within."

Phi Hong Su's "The Border Within"

The Page 99 Test
More in Sociology—Immigration