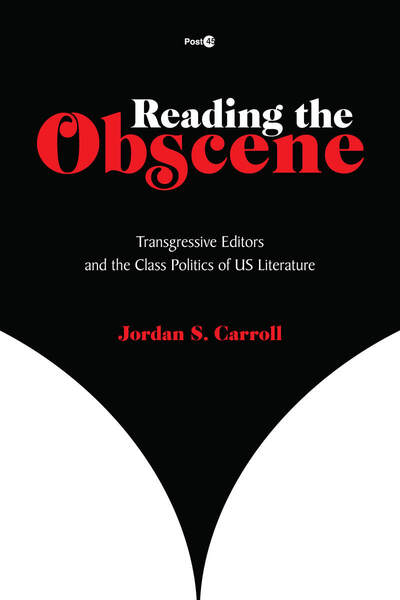 Winner of the 2022 MLA Prize for Independent Scholars, sponsored by the Modern Language Association (MLA).

With Reading the Obscene, Jordan Carroll reveals new insights about the editors who fought the most famous anti-censorship battles of the twentieth century. While many critics have interpreted obscenity as a form of populist protest, Reading the Obscene shows that the editors who worked to dismantle censorship often catered to elite audiences composed primarily of white men in the professional-managerial class.

As Carroll argues, transgressive editors, such as H. L. Mencken at the Smart Set and the American Mercury, William Gaines and Al Feldstein at EC Comics, Hugh Hefner at Playboy, Lawrence Ferlinghetti at City Lights Books, and Barney Rosset at Grove Press, taught their readers to approach even the most scandalizing texts with the same cold calculation and professional reserve they employed in their occupations. Along the way, these editors kicked off a middle-class sexual revolution in which white-collar professionals imagined they could control sexuality through management science. Obscenity is often presented as self-shattering and subversive, but with this provocative work Carroll calls into question some of the most sensational claims about obscenity, suggesting that when transgression becomes a sign of class distinction, we must abandon the idea that obscenity always overturns hierarchies and disrupts social order.

Jordan Carroll is Visiting Assistant Professor at the University of Puget Sound. His writing has appeared in Post45, Twentieth-Century Literature, and American Literature.

"In Carroll's hands, the question of obscenity in midcentury literature has a whole new conceptual frame and in the figure of theeditor, a whole new protagonist. Going where few critical works before it have dared to tread, this is a highly persuasive and lucidly readable contribution to twentieth-century American cultural studies."

The Baffler
More in Literary Studies—American