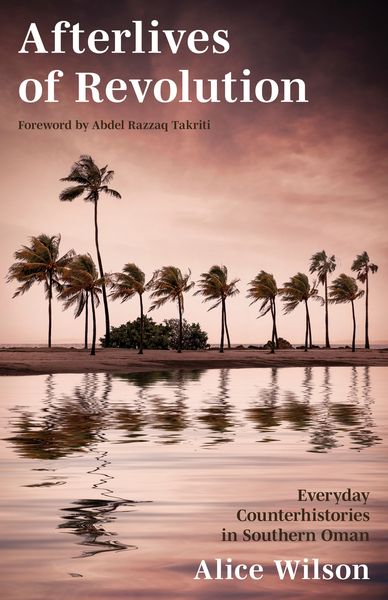 The Dhufar Revolution was fought between 1965–1976, in an attempt to depose Oman's British-backed Sultan and advance social ideals of egalitarianism and gender equality. Dhufar, the southernmost governorate in today's Sultanate, captured global attention for its revolutionaries and their liberation movement's Marxist-inspired social change. But following counterinsurgency victory, Oman's government expunged the revolution from sanctioned historical narratives. Afterlives of Revolution offers a groundbreaking study of the legacies of officially silenced revolutionaries. How do their underlying convictions survive and inspire platforms for progressive politics in the wake of disappointment, defeat, and repression?

Alice Wilson considers the "social afterlives" of revolutionary values and networks. Veteran militants have used kinship and daily socializing to reproduce networks of social egalitarianism and commemorate the revolution in unofficial ways. These afterlives revise conventional wartime and postwar histories. They highlight lasting engagement with revolutionary values, the agency of former militants in postwar modernization, and the limitations of government patronage for eliciting conformity. Recognizing that those typically depicted as coopted can still reproduce counterhegemonic values, this book considers a condition all too common across Southwest Asia and North Africa: the experience of defeated revolutionaries living under the authoritarian state they once contested.

Alice Wilson is Senior Lecturer in Anthropology at the University of Sussex. She is the author of Sovereignty in Exile: A Saharan Liberation Movement Governs (2016).

"Afterlives of Revolution destabilizes triumphant narratives of counterinsurgency and advances a brilliant critique of reductionist perceptions that often define revolutions merely with references to their success or failure. Ethnographically rich and theoretically sophisticated, Alice Wilson shifts the question of 'what makes a revolution' to that of how the lasting values, hopes, promises, and social networks of a revolutionary moment continue to inform peoples' political and kinship relations."

"Alice Wilson has produced a stunning ethnography exploring the ideals and social relationships forged in a revolutionary movement and lived after its formal defeat. She describes the struggles and connections of those whose hopes have been constrained but not erased. This beautiful work serves as a model for the best of anthropological research and writing."

"An extraordinary study. By uncovering the survival strategies and legacies of armed insurgencies in Oman, Afterlives of Revolution sheds light on an important, yet under-explored aspect of post-war politics. This pathbreaking work is of great relevance to scholars of autocratic regimes, and peace and conflict studies."

—Gyda Sindre, University of York and the Politics after War Network