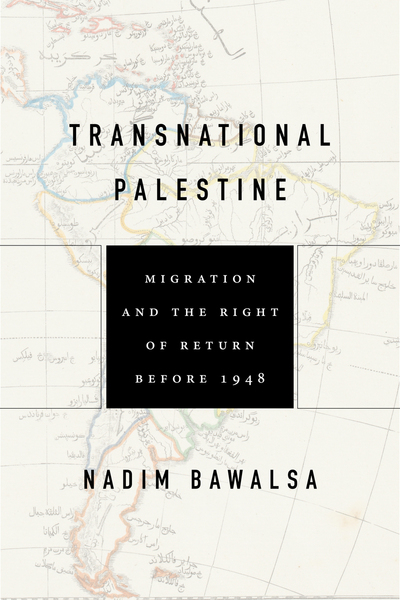 Transnational Palestine
Migration and the Right of Return before 1948
Nadim Bawalsa
SERIES: Worlding the Middle East

Nadim Bawalsa considers the migrants' strategies for economic success in the diaspora, for preserving their heritage, and for resisting British mandate legislation, including citizenship rejections meted out to thousands of Palestinian migrants. They did this in newspapers, social and cultural clubs and associations, political organizations and committees, and in hundreds of petitions and pleas delivered to local and international governing bodies demanding justice for Palestinian migrants barred from Palestinian citizenship. As this book shows, Palestinian political consciousness developed as a thoroughly transnational process in the first half of the twentieth century—and the first articulation of a Palestinian right of return emerged well before 1948.

Nadim Bawalsa is a historian of modern Palestine. He holds a PhD in History and Middle Eastern & Islamic Studies from New York University.

"A significant contribution to the history of Palestinian transnational activism. Anchoring his story in the lives of Palestinians in Latin America, Nadim Bawalsa amplifies the diasporic dimension of the 'right of return.' A must read for scholar-activists of the modern Middle East, inter-war politics, and national liberation struggles."

"Transnational Palestine is an extensive and original investigation into the lives of early Palestinian migrants in Latin America. Nadim Bawalsa has an uncanny ability to evoke from submerged archival sources and diaspora presses the adventures and tribulations of those pioneering travelers."

—Salim Tamari, author of The Great War and the Remaking of Palestine

"Bawalsa succeeds in widening the reader's temporal and geographical horizons when thinking about the right of return, and in doing so, he helps us to better understand the Palestinians history of dispossession."

The Case for Palestinian Nationality