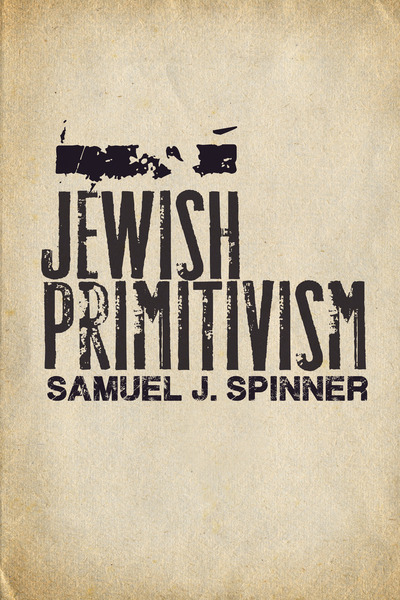 Around the beginning of the twentieth century, Jewish writers and artists across Europe began depicting fellow Jews as savages or "primitive" tribesmen. Primitivism—the European appreciation of and fascination with so-called "primitive," non-Western peoples who were also subjugated and denigrated—was a powerful artistic critique of the modern world and was adopted by Jewish writers and artists to explore the urgent questions surrounding their own identity and status in Europe as insiders and outsiders. Jewish primitivism found expression in a variety of forms in Yiddish, Hebrew, and German literature, photography, and graphic art, including in the work of figures such as Franz Kafka, Y.L. Peretz, S. An-sky, Uri Zvi Greenberg, Else Lasker-Schüler, and Moï Ver.

In Jewish Primitivism, Samuel J. Spinner argues that these and other Jewish modernists developed a distinct primitivist aesthetic that, by locating the savage present within Europe, challenged the idea of the threatening savage other from outside Europe on which much primitivism relied: in Jewish primitivism, the savage is already there. This book offers a new assessment of modern Jewish art and literature and shows how Jewish primitivism troubles the boundary between observer and observed, cultured and "primitive," colonizer and colonized.

"In this revelatory book, Samuel J. Spinner uncovers the paradoxical primitivist yearnings motivating a generation of Jewish visual artists and writers in Yiddish, German, and Hebrew. What happens when Jewish artists and writers see other Jews as the 'savage' other, as though Picasso's African masks had been carved by his own cousins?"

"Jewish Primitivism makes a compelling and truly fresh argument for placing the phenomenon of modernist primitivism practiced by Jewish writers and artists at the center of our attempts to understand the paradoxical position of Jews and Jewish art in 20th-century Europe, and consequently the crises of nation and nationalism—for Jews and non-Jews—that underwrite the upheavals and cataclysms of the period."

"One of the many strengths of Jewish Primitivism is that it raises a diverse set of considerations. Spinner's illuminating study is essential reading for those interested in modernist primitivism, in Yiddish and German Jewish literatures, in the encounter of German Jews with east European Jews, and in Jewish modernism in general."