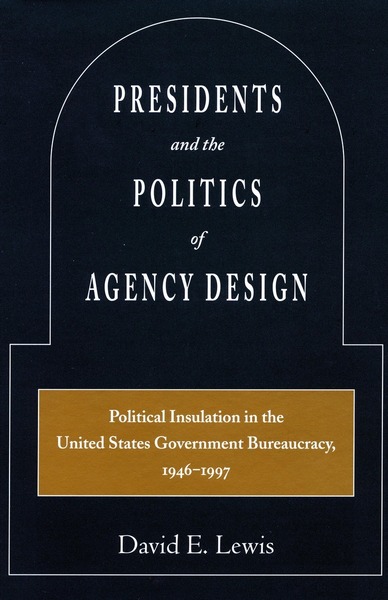 The administrative state is the nexus of American policy making in the postwar period. The vague and sometimes conflicting policy mandates of Congress, the president, and courts are translated into real public policy in the bureaucracy. As the role of the national government has expanded, the national legislature and executive have increasingly delegated authority to administrative agencies to make fundamental policy decisions. How this administrative state is designed, its coherence, its responsiveness, and its efficacy determine, in Robert Dahl’s phrase, “who gets what, when, and how.” This study of agency design, thus, has implications for the study of politics in many areas.

The structure of bureaucracies can determine the degree to which political actors can change the direction of agency policy. Politicians frequently attempt to lock their policy preferences into place through insulating structures that are mandated by statute or executive decree. This insulation of public bureaucracies such as the National Transportation Safety Board, the Federal Election Commission, and the National Nuclear Security Administration, is essential to understanding both administrative policy outputs and executive-legislative politics in the United States.

This book explains why, when, and how political actors create administrative agencies in such a way as to insulate them from political control, particularly presidential control.

David E. Lewis is Assistant Professor in the Department of Politics and the Woodrow Wilson School of Public and International Affairs at Princeton University.

"...Presidents and the Politics of Agency Design is simply one of the finest scholarly treatises on U.S. executive politics to be published during the past decade."

"Lewis has written a book that provides theoretical fodder for scholars in a variety of different fields. This is an excellent book on agency design, but it aso tells us a great deal about the separation of powers, the continuing struggle between the president and Congress over policy hegemony, and political control of the bureaucracy. It also is an important work on the institutional presidency. . . . As such this is an important work that will be widely cited and almost assuredly will be the basis for continuing research. . . This is an extremely important work that should have a major impact on the study of presidential-congressional and presidential-bureaucratic relations."

"Lewis does an excellent job of carefully analyzing the interactive effects of divided government, partisan majorities, and presidential approval."

" . . . [A] highly impressive, well-written study of how agencies in the federal bureaucracy are designed . . ."