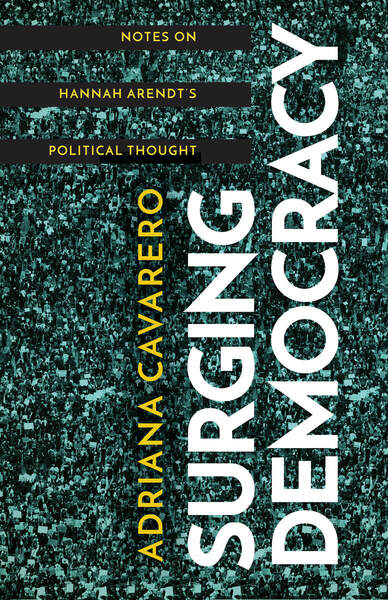 What does a truly democratic experience of political action look like today? In this provocative new work, Adriana Cavarero weighs in on contemporary debates about the relationship between democracy, happiness, and dissent. Drawing on Arendt's understanding of politics as a participatory experience, but also discussing texts by Émile Zola, Elias Canetti, Boris Pasternak, and Roland Barthes, along with engaging Judith Butler, Cavarero proposes a new view of democracy, based not on violence, but rather on the spontaneous experience of a plurality of bodies coming together in public. Expanding on the themes explored in previous works, Cavarero offers a timely intervention into current thinking about the nature of democracy, suggesting that its emergence thrives on the nonviolent creativity of a widespread, participatory, and relational power that is shared horizontally rather than vertically. From digital democracy to selfies to contemporary protest movements, Cavarero argues that we need to rethink our focus on individual happiness and turn toward rediscovering the joyful emotions of birth through plural interaction. Yes, let us be happy, she urges, but let us do so publicly, politically, together.

Adriana Cavarero is author of For More Than One Voice: Toward a Philosophy of Vocal Expression (Stanford, 2005) and Inclinations: A Critique of Rectitude (2016). Her other titles in English include Horrorism: Naming Contemporary Violence (Stanford, 2008), and Thou Shalt Not Kill: A Political and Theological Dialogue (2015).

"Adriana Cavarero's characteristically provocative new work is once again central to debates about the nature of democracy. As always, her writing is striking for its clarity and economy."

"Adriana Cavarero gives us an inspiring vision of what democracy might mean if we stay true to the Arendtian spirit of identifying a space where individualities can flourish in their togetherness—ultimately, a space of public happiness."