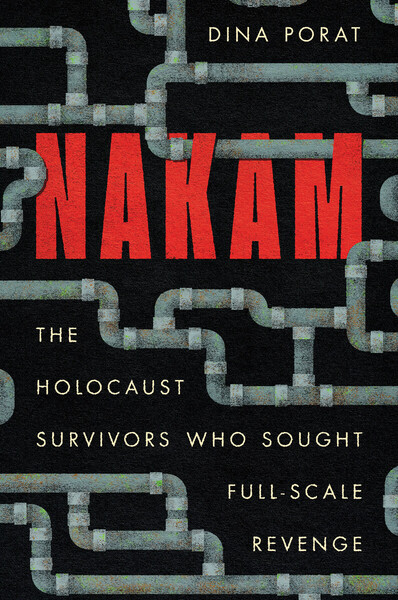 Nakam (Hebrew for "vengeance") tells the story of "the Avengers" (Nokmim), a group of young Holocaust survivors led by poet and resistance fighter Abba Kovner, who undertook a mission of revenge against Germany following the crimes of the Holocaust. Motivated by both the atrocities they had endured and the realization that murderous antisemitic attacks on survivors continued long after the Nazi surrender, these fifty young men and women sought retaliation at a level commensurate with the devastation caused by the Holocaust, making clear to the world that Jewish blood would no longer be shed with impunity. Had they been successful, they would have poisoned city water supplies and loaves of bread distributed to German POWs, with the aim of killing six million Germans. Kovner and his followers went to great lengths to carry out their plans, going so far as to obtain the schematics for Nuremberg's municipal water system, secure large quantities of poison, infiltrate a POW camp and the bakery that supplied it, and distribute poisoned bread to prisoners—but their plots were ultimately stymied. Most of the members of Nakam eventually returned to Israel, where for decades many of them refused to speak publicly about their roles in the group.

While the Avengers' story began to come to light in the 1980s, details of the relations between the group and Zionist leadership and the motivations of its members have remained unknown. Drawing on rich archival sources and in-depth interviews with the Avengers in their later years, historian Dina Porat examines the formation of the group and the clash between the formative humanistic values held by its members and their unrealized plans for violent retribution.

"Completely engrossing, Nakam reads like the best detective novel, while also being a first-class work of historical research."

"A thoughtful and meticulously researched study of the postwar Jewish plan to murder six million Germans in retaliation for the Holocaust, a topic that had been written out of history for too long because of its moral ambiguity and political sensitivity. A must-read for anyone interested in post-traumatic recovery of victims after genocide.—Laura Jockusch, author of Collect and Record!: Jewish Holocaust Documentation in Early Postwar Europe

"This elegantly written book gives pause to ponder how great and awful can be the consequences when the law fails to protect those most in need of protection.—David Engel, author of The Assassination of Symon Petliura and the Trial of Sholem Schwarzbard 1926-1927

"Written by one of Israel's most eminent historians, this fascinating book demonstrates the impossibility of just retribution for genocide, and the vast gap between the integrity of the Avengers and the horrific nature of their goal. Nakam is a deeply-researched, empathetic, and compelling account of the men and women who vowed to avenge the murderers of their families and communities."

—Omer Bartov, author of Tales from the Borderlands: Making and Unmaking the Galician Past

"In the wake of the Holocaust, the overwhelming priority of Jewish activists in Europe and the Palestine Mandate was the rescue and emigration of survivors and the founding of a Jewish state. Nakam tells the story of the most notable exception to these efforts: the close-knit group of former resistance fighters who resolved on killing six million Germans in a stunning act of vengeance. A deeply-researched, insightful, but also empathetic study."

"This meticulous and empathetic study gives an overlooked chapter of Jewish history its due."

‘Plan A’: A very, different kind of Holocaust film