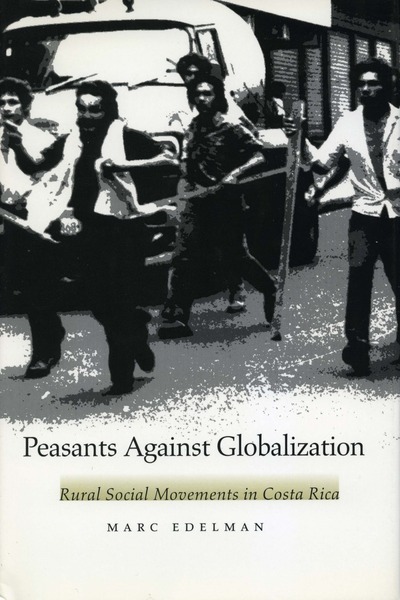 Honorable Mention in the 2003 Book Prize, sponsored by the Society for Economic Anthropology.

This book tells the story of how small farmers responded to a free-market onslaught that devastated one of the Western Hemisphere’s most advanced social-democratic welfare states. In the early 1980s, the Latin American debt crisis struck Costa Rica, leading to major cutbacks in the social programs that had permitted the rural poor to attain an acceptable standard of living and a modicum of dignity.

Peasants were in the forefront of movements against these cutbacks, marching, blocking highways, and occupying government buildings. In the struggle to preserve their livelihood, the rural poor also formed alliances with wealthy farmers, negotiated with politicians, and embraced and then repudiated charismatic outsiders who came to live among them and to speak in their name. These rural activists combined class-bound politics with concerns about threatened peasant identities, practical analysis with sentimentality, grassroots democracy with conspiratorial secrecy, and selfless sacrifice with opportunism.

The small farmers portrayed in this book are worldly, outspoken, exuberant, future-oriented, and fiercely proud. They could hardly be less like the unsophisticated and stoic rustics so prominent in the development literature or those contemporary peasants whose imminent disappearance is endlessly predicted by both right- and left-wing social scientists.

The author argues that the experience of rural activism in Costa Rica in the 1980s and 1990s calls into question much current theory about collective action, peasantries, development, and ethnographic research. The book invites the reader to rethink debates about old and new social movements and to grapple with the ethical and methodological dilemmas of engaged ethnography.

Marc Edelman is Professor of Anthropology at Hunter College and the Graduate Center of City University of New York. He is the author of The Logic of the Latifundio: The Large Estates of Northwestern Costa Rica Since the Late Nineteenth Century (Stanford, 1992).

"This beautifully written book is of great theoretical importance for social movement theory and peasant studies, as well as for understanding the impact of neoliberalism in Latin America and the role of grassroots organizations in development. . . . Edelman brings to bear the results of two decades of fieldwork in various Costa Rican settings."

"Edelman's work is an imporant corrective in an age when 'privatization' and the magic of the 'free market' are increasingly touted as the keys to global social prosperity. His combination of macroeconomic analysis and ethnography is a welcome addition to the exploding literature on globalization; his research at the grassroots helps bring 'world-system' discussions down from the level of grand statistical abstraction to real-world human beings, while his treatment of broad-scale economic trends helps place his ethnographic detail in its proper historical context. This book will be a valuable aid in courses exploring global processes from both sociological and anthropological perspectives."

"This is far from a traditional work of cultural anthropology. It reflects the best of the discipline's recent soul-searching revisionism. Sandwiched between an insightful review of the literature on peasants and a touch of self-reflection on the ethics of being an active participant observer is a detailed account of several local and national peasant organizations and their struggles with the globalization process in Costa Rica from about 1985 to 1995."

"Peasants Against Globalization provides an insightful case study of the impact of neoliberal politics in one country as well as an admirably thoughtful account of the campesinos' struggles to establish their basic rights."