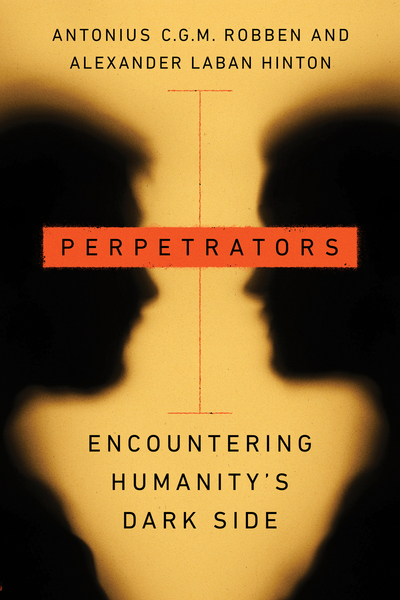 Perpetrators of mass violence are commonly regarded as evil. Their violent nature is believed to make them commit heinous crimes as members of state agencies, insurgencies, terrorist organizations, or racist and supremacist groups. Upon close examination, however, perpetrators are contradictory human beings who often lead unsettlingly ordinary and uneventful lives. Drawing on decades of on-the-ground research with perpetrators of genocide, mass violence, and enforced disappearances in Cambodia and Argentina, Antonius Robben and Alex Hinton explore how researchers go about not just interviewing and writing about perpetrators, but also processing their own emotions and considering how the personal and interpersonal impact of this sort of research informs the texts that emerge from them.

Through interlinked ethnographic essays, methodological and theoretical reflections, and dialogues between the two authors, this thought-provoking book conveys practical wisdom for the benefit of other researchers who face ruthless perpetrators and experience turbulent emotions when listening to perpetrators and their victims. Perpetrators rarely regard themselves as such, and fieldwork with perpetrators makes for situations freighted with emotion. Research with perpetrators is a difficult but important part of understanding the causes of and creating solutions to mass violence, and Robben and Hinton use their expertise to provide insightful lessons on the epistemological, ethical, and emotional challenges of ethnographic fieldwork in the wake of atrocity.

Antonius C.G.M. Robben is Professor Emeritus of Anthropology at Utrecht University in the Netherlands. He is the author of Argentina Betrayed: Memory, Mourning, and Accountability (2018) and Political Violence and Trauma in Argentina (2005).

Alexander Laban Hinton is Distinguished Professor of Anthropology at Rutgers University and UNESCO Chair in Genocide Prevention. He is the recipient of the American Anthropological Association's 2022 Anthropology in Media Award for his work raising awareness of genocide and human rights. He is the author of The Justice Facade: Trials of Transition in Cambodia (2018) and Man or Monster? The Trial of a Khmer Rouge Torturer (2016).

"In Robben and Hinton's 'encounter with humanity's dark side' the perpetrator researcher and the evildoer become inextricably intertwined. Researchers' intimate fieldwork contact with perpetrators of mass atrocity sullies them, they feel dirty. And, yet, it reveals complex and contradictory human beings that unsettle facile assumptions about their monstrosity. How do researchers incorporate cognitive and affective empathy to understand the 'priming' that make atrocities possible, while condemning those acts? Perpetrators establishes the craft for doing so."

"Written as a sustained conversation between two foundational figures in the field of perpetrator studies, this book offers a rich exploration of the individuals who operate the machinery of mass murder. The authors combine profound insights into universal phenomena, while demonstrating the importance of understanding local specificities and moral economies. This unsettling book charts a future research agenda for those who seek to understand the disturbing, unholy mixture of humanity among those who engage in lethal violence."