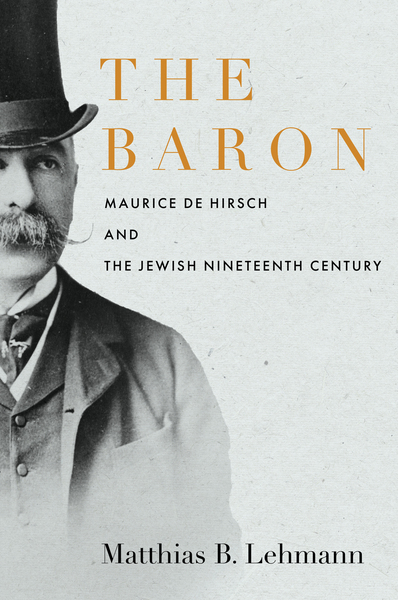 A sweeping biography that opens a window onto the gilded age of Jewish philanthropy.

Baron Maurice de Hirsch was one of the emblematic figures of the nineteenth century. Above all, he was the most influential Jewish philanthropist of his time. Today Hirsch is less well known than the Rothschilds, or his gentile counterpart Andrew Carnegie, yet he was, to his contemporaries, the very embodiment of the gilded age of Jewish philanthropy. Hirsch's life provides a singular entry point for understanding Jewish philanthropy and politics in the late nineteenth century, a period when, as now, private benefactors played an outsize role in shaping the collective fate of Jewish communities.

Hirsch's vast fortune derived from his role in creating the first rail line linking Western Europe with the Ottoman Empire, what came to be known as the Orient Express. Socializing with the likes of the Austrian crown prince Rudolph and "Bertie," Prince of Wales, Hirsch rose to the pinnacle of European aristocratic society, but also found himself the frequent target of vicious antisemitism. This was an era when what it meant to be Jewish—and what it meant to be European—were undergoing dramatic changes. Baron Hirsch was at the center of these historic shifts.

While in his time Baron Hirsch was the subject of widespread praise, enraged political commentary, and conspiracy theories alike, his legacy is often overlooked. Responding to the crisis wrought by the mass departure of Jews from the Russian Empire at the turn of the century, Hirsch established the Jewish Colonization Association, with the goal of creating a refuge for the Jews in Argentina. When Theodor Herzl, the founder of Zionism, advertised his plan to create a Jewish state (not without inspiration from Hirsch), he still wondered whether to do so in Palestine or in Argentina—and left the question open. In The Baron, Matthias Lehmann tells the story of this remarkable figure whose life and legacy provide a key to understanding the forces that shaped modern Jewish history.

Matthias B. Lehmann is Teller Family Chair in Jewish History and Professor of History at the University of California, Irvine.

"An invaluable addition to a growing library of serious studies of Jewish history and philanthropy, this book expertly situates Baron Hirsch in the crosshairs of almost every modern question—and the Jewish Question itself—on the eve of the twentieth century. With vivid detail and an unrivalled command of Hirsch's multiple historical settings, Matthias B. Lehmann exposes the great hope and painful irony of Hirsch's promise to pay for Jews' passage into modernity and freedom."

—Lila Corwin Berman, author of The American Jewish Philanthropic Complex: The History of a Multibillion-Dollar Institution

"This book offers a new look at the history of modern European Jewry and a fresh understanding of modern Europe itself. Combining impeccable research with clear, flowing, and attractive prose, Matthias B. Lehmann has created a first-rate intellectual experience that is also a finely wrought and compelling narrative."

"Few individuals have left a mark so profound on modern Jewish history as Baron Maurice de Hirsch, who envisioned using his vast wealth to solve the vexing problems confronting the Jews of the Czarist and Ottoman empires. Matthias B. Lehmann's monumental biography restores de Hirsch to his rightful place as a key figure in a history that spanned continents and transformed the Jewish world."

—Hasia R. Diner, author of Roads Taken: The Great Jewish Migrations to the New World and the Peddlers Who Forged the Way

"A very impressively researched study of a crucial figure in modern Jewish history, as well as the history of the Ottoman Empire, European history, and their intersections. With his extensive work in several archives around the world, and in many languages, Matthias B. Lehmann has produced a keenly argued biography of Baron Hirsch."

—Michael Stanislawski, author of A Murder in Lemberg: Politics, Religion, and Violence in Modern Jewish History

"Written in elegant and evocative prose, Lehmann's colorful biography reveals for the first time the outsized influence that Baron Hirsch had on the modern world from the Ottoman Empire to Argentina. A stunning history that forces us to think about the responsibilities that come with great wealth, the power of philanthropy, and the challenges of social engineering."

—Jeffrey Veidlinger, author of In the Midst of Civilized Europe: The Pogroms of 1918-1921 and the Onset of the Holocaust

"Mr. Lehmann, a professor of history at the University of California, Irvine, recounts the life and ventures of a tycoon in the first age of globalization. ... Hirsch destroyed his private papers, but Mr. Lehmann ably reassembles his business affairs from multiple archives. The baron's dream was more than a naïve preamble to Herzl's diplomatic Zionism. It was part of the optimistic, open-bordered and practical-minded age into which Hirsch was born."

"Matthias B. Lehmann... gives Hirsch's story new life withThe Baron. The biography evokes both a charismatic character and a tumultuous era in Jewish history. And readers will savor a poignant paradox: Although Baron de Hirsch renounced involvement in the Zionist movement, aspects of his legacy benefited pioneers in Palestine for decades after his death."