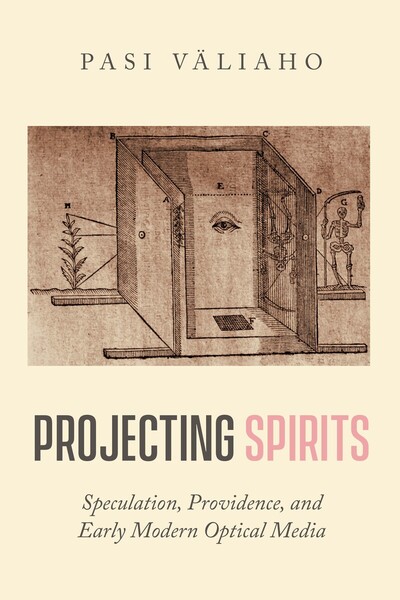 The history of projected images at the turn of the seventeenth century reveals a changing perception of chance and order, contingency and form. In Projecting Spirits, Pasi Väliaho maps how the leading optical media of the period—the camera obscura and the magic lantern—developed in response to, and framed, the era's key intellectual dilemma of whether the world fell under God's providential care, or was subject to chance and open to speculating.

As Väliaho shows, camera obscuras and magic lanterns were variously employed to give the world an intelligible and manageable design. Jesuit scholars embraced devices of projection as part of their pursuit of divine government, whilst the Royal Society fellows enlisted them in their quest for empirical knowledge as well as colonial expansion. Projections of light and shadow grew into critical metaphors in early responses to the turbulences of finance. In such instances, Väliaho argues, "projection" became an indispensable cognitive form to both assert providence, and to make sense of an economic reality that was gradually escaping from divine guidance. Drawing on a range of materials—philosophical, scientific and religious literature, visual arts, correspondence, poems, pamphlets, and illustrations—this provocative and inventive work expands our concept of the early media of projection, revealing how they spoke to early modern thinkers, and shaped a new, speculative concept of the world.

Pasi Väliaho is Professor in History of Art and Visual Studies, University of Oslo. His last book was Biopolitical Screens: Image, Power, and the Neoliberal Brain (2014).

"This commanding, erudite history of the 'magic' that goes with optical technologies makes a major and enduring contribution to visual studies, to the history of science, and to the political economy of images."

"Pasi Väliaho provides a captivating take on projection. Projecting Spirits includes a historically rich and deep understanding of the connection between images and economies of both money and souls. As it maps how the virtual and the imaginary become effective anchors of the real world, this wonderful book amounts to nothing less than a project about time: an invention of such a future that becomes a speculative project."