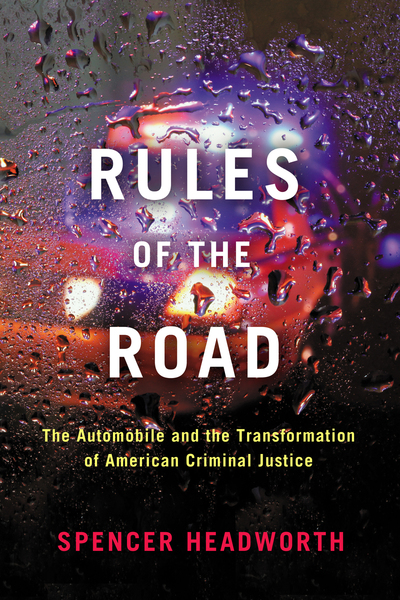 Driving is an unavoidable part of life in the United States. Even those who don't drive much likely know someone who does. More than just a simple method of getting from point A to point B, however, driving has been a significant influence on the United States' culture, economy, politics – and its criminal justice system. Rules of the Road tracks the history of the car alongside the history of crime and criminal justice in the United States, demonstrating how the quick and numerous developments in criminal law corresponded to the steadily rising prominence, and now established supremacy, of the automobile.

Spencer Headworth brings together research from sociology, psychology, criminology, political science, legal studies, and histories of technology and law in illustrating legal responses to changing technological and social circumstances. Rules of the Road opens by exploring the early 20th-century beginnings of the relationship between criminal law and automobility, before moving to the direct impact of the automobile on prosecutorial and criminal justice practices in the latter half of the 20th century. Finally, Headworth looks to recent debates and issues in modern-day criminal justice to consider what this might presage for the future.

Using a seemingly mundane aspect of daily life as its investigative lens, this creative, imaginative, and thoroughly researched book provides a fresh perspective on the transformations of the U.S. criminal justice system.

Spencer Headworth is Assistant Professor of Sociology at Purdue University. He is the author of Policing Welfare: Punitive Adversarialism in Public Assistance, which received honorable mention for the Herbert Jacob Book Prize.